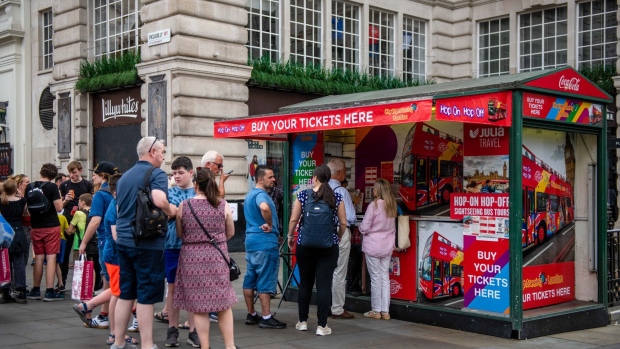 Tourists queue to buy tickets for sightseeing bus tours in London, UK, on Wednesday, Aug. 3, 2022. It's never been more expensive to get a hotel room in London after rates rose to a record in June on the back of increased travel by tourists. , Bloomberg

(Bloomberg) -- London’s West End shopping district and other UK hotspots for tourism spending are expecting a boost from a decision to let foreign visitors claim back value added tax again.

Chancellor of the Exchequer Kwasi Kwarteng announced the move as part of a package of tax cuts Friday, reinstating an exemption that ended last year.

Non-U.K. visitors to Great Britain will be able to obtain a refund on the 20% tax for goods bought in the U.K. and exported in their personal baggage.

The reversal of the decision of the previous Conservative government to scrap the tax refund was welcome news for retailers of luxury fashion and jewelry, popular with wealthy tourists.

Enticing tourists to shop in Britain could be an indirect boost to the hospitality sector, too. Industry bodies welcomed the decision, but called for more support for their sectors.

“While tax-free shopping for overseas customers is a welcome step to attract overseas tourists, a far more immediately impactful step would be to reduce VAT for our domestic customers,” UK Hospitality said in a statement.