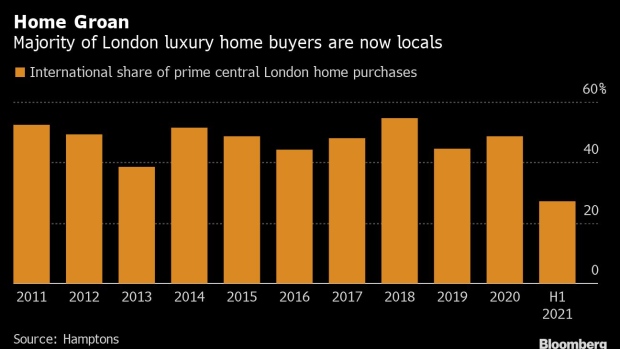 The portion of buyers from overseas plunged to just 27% in the first half of this year, the lowest since estate agent Hamptons International began tracking the data in 2011. It’s just over half that of 2020 when the pandemic locked down much of the planet.

London’s prime market, with some of the world’s most expensive homes, has long been dependent on jet-setting international buyers to bid up prices -- they’ve accounted for around half of the market over the past decade. That was still the case in 2020 even with the shutdown of global travel.

This year, the portion of buyers from every region bar the Middle East and East Asia has fallen or flat-lined as transaction costs get pricier. From April, foreign buyers became subject to a 2% stamp duty surcharge, while the pound has climbed about 6% against the U.S. dollar over the past 12 months.

“This is quite a big shift that we’ve seen over this last year,” said Aneisha Beveridge, head of research for Hamptons. “While the return of international buyers is still very much pinned to coronavirus, we expect buyer numbers will start to rise toward the end of the year and into 2022 as global travel opens up.”

Sellers would likely cheer their return. Prices in the city’s wealthiest districts were largely stagnant even before the pandemic, after a series of tax hikes and the uncertainty following the 2016 Brexit vote. They climbed just 1.7% in the year to July, according to data company LonRes, even as the U.K.’s mainstream housing market continued to enjoy a boom.