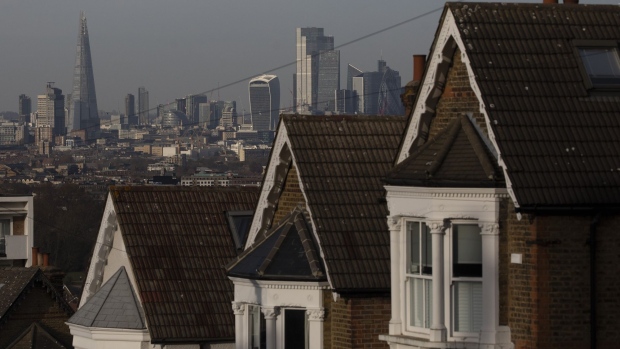 A terrace of residential houses in the Dulwich district in view of skyscrapers in the City of London, U.K., on Tuesday, Nov. 24, 2020. Asking prices for U.K. homes slipped this month as owners sought to get sales agreed in time to benefit from a temporary tax cut. Photographer: Simon Dawson/Bloomberg , Bloomberg

(Bloomberg) -- New home sales in London leaped to their strongest levels in a year in the third quarter as confidence in the capital rebounded, but a slump in completed projects due to labor and material shortages clouded the outlook.

Purchases of newly built homes in developments tracked by data company Molior jumped 21% from the previous three months, according to a preliminary report seen by Bloomberg. The number of completed homes, however, fell 30% and construction programs are being delayed, the report said.

“The reasons for this slump cover the full range of labor, plant and materials shortages,” Molior researchers said in the report. “Build costs are expected to rise.”

Builders have joined the growing number of U.K. companies citing a shortage of workers as a concern for the months ahead, just as London’s apartment market shows signs of a revival. Slack demand for units that weighed on prices and rental values is reversing as lockdown restrictions ease and people return to live and work in the city center.

The third-quarter sales increase was largely thanks to investments in purpose-built rental units across the capital. Purchases of homes which have been converted into affordable housing and international buyers also bumped up the numbers.

While London’s rental growth still lags the rest of the country, its 2.7% year-on-year increase in the third quarter was the first rise seen since the start of the pandemic, according to property portal Rightmove. As well as workers coming back to the office in ever higher numbers, a return of international students since the start of the academic year in September has also buoyed demand for housing in the capital.

“The industry has reasons for cautious optimism on the short-term sales front, but some thought must be spared for those working on the construction sites,” said researchers at Molior, which tracks sales at projects with 20 units or more. “How this will affect developers’ views on project viability remains to be seen,” they added.