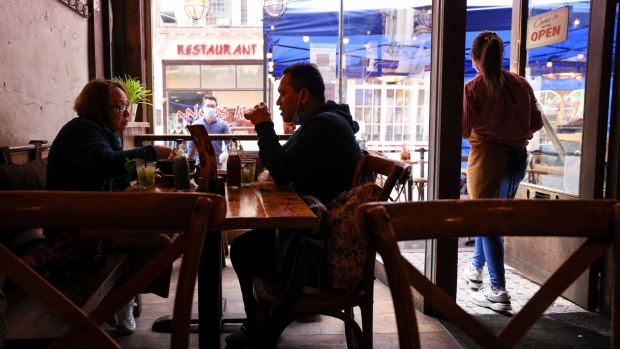 Customers sit inside a Vietnamese restaurant in London, U.K., on Monday, May 17, 2021. England progresses to its third step in easing lockdown restrictions as part of its “roadmap” to recovery, loosening rules for both outdoor and indoor gatherings. Photographer: Chris Ratcliffe/Bloomberg , Bloomberg

(Bloomberg) -- London’s pubs and clubs have yet to fully recover from the pandemic, hit by staff shortages, a decline in visitors and growing consumer fears about the new omicron variant.

Footfall in the U.K. capital is still below pre-pandemic levels ahead of the vital Christmas period and advance bookings are lower than they should be for 2022, according to a report published Wednesday by a committee that scrutinizes the London mayor’s work.

London’s night-time businesses -- which contributed between 17 billion pounds ($22.5 billion) and 26 billion pounds to the economy before the pandemic -- have been open since July when lockdown restrictions were lifted. However, while some businesses are reporting a return to pre-Covid-19 levels of sales, the recovery for many is uneven.

Prolonged closures during lockdown which led to the failure of businesses and the exit of thousands of workers from the sector mean staff shortages are acute. Door security in London is operating at about 80 percent of pre-Covid levels, hindering the operations of businesses required to implement public safety measures, such as checking customer vaccination records, the report says.

The Night Tube reopened on the Central and Victoria lines in late November, in what should have been a much-needed boost to the city’s night-time economy, but was promptly disrupted by industrial action amid union disputes.

Businesses from music venues to nightclubs are also grappling with changing consumer behavior. “The shape of the spend is very different,” said Paul Kohler, owner of CellarDoor in London’s West End. “Mondays and Fridays are a lot quieter. Tuesdays, Wednesdays and Thursdays are a lot busier. That is because that is when people tend to go in to work.”

Younger audiences have been quicker to return than older ones.

“Contemporary music gigs are selling out. Comedy is selling out. Talks aimed at younger audiences are selling out,” said  Elaine Bedell, chief executive officer of the Southbank Centre, a complex of artistic venues. “Classical music has been much slower, and I know from the Arts Council that that is pretty widespread across the country.”

The report calls on London mayor Sadiq Khan to set targets for recruiting additional hospitality workers and skills training, improve safety in the capital, and ensure the rest of the Night Tube returns “as soon as is feasibly possible.”