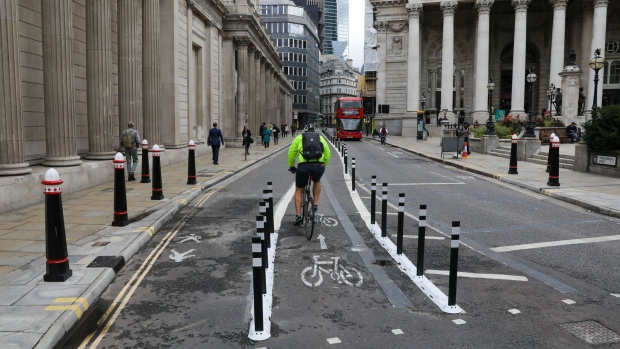 Bollards protect a cycle lane and an extended pedestrian area outside the Bank of England in the Square Mile financial district of the City of London. , Bloomberg

(Bloomberg) -- London’s financial district is planning to eliminate its carbon dioxide emissions by 2040, investing 68 million pounds ($88 million) to tackle climate change and create 800 jobs over the next six years.

The Square Mile area will see more streets dedicated to walking and cycling, new parks, timed street closures and the installation of flood-resistant road surfaces, under a plan announced Thursday by the City of London Corp. New developments will be required to have carbon-reduction plans in their designs, and green wall space that includes plants will increase by 50%.

The City Corp.’s plan is more ambitious than the U.K.’s, which has set a national target for net-zero carbon emissions by 2050. The business district is responsible for annual emissions of 1,556 kilotons of carbon dioxide equivalent, it said, which is more than the emissions of Barbados.

What will be most challenging is reducing the emissions that it doesn’t directly cause. Just 2.3% of its emissions are from its own operations or its suppliers, known as scope 1 and scope 2 emissions.

The remaining 97.7% of its emissions, known as scope 3, cover everything it buys, sells, invests in, leases to others and disposes of, as well as commuting and business travel. The corporation won’t use carbon offsets to deal with those emissions and instead will take practical steps to eliminate them. “Working in partnership with City firms we will strengthen our position and become a world leader in the climate change fight,” Catherine McGuinness, policy chair at the City of London Corp., said in a statement.

The plans set out today also include:

The City Corp. will spend 2 million pounds introducing 150-year-old sustainable land management practices at some of its 11,000 acres of green space in London and southeast England, and will increase the area of green roofs by more than 50%. It’s already running a pilot this month that involves putting cattle out to graze at a park in East London to better manage and restore acid-grasslands in the area for wildlife conservation. Each cow has an electronic tracking collar to remove the need for electric fences.

But the plan may not go far enough, according to Stefano Ambrogi, a spokesman for the Carbon Tracker Initiative. Its report earlier this year found the City of London is home to companies and financial institutions that together are responsible for approximately 15% of global emissions at a minimum.

“Obviously we welcome what the City of London is doing but nothing is being done to tackle the funds still going through the city that are propping up fossil fuels,” he said.