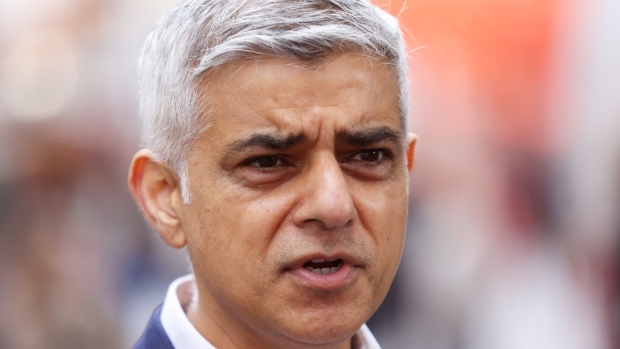 Passengers exit an underground train at Nine Elms Station on the extension of the Northern Line on the London Underground network in London, U.K., on Friday, Sept. 24, 2021. The first major extension of London's Tube system in decades -- a 1.1 billion-pound ($1.5 billion) project that began about six years ago -- finally came into fruition on Monday. Photographer: Chris Ratcliffe/Bloomberg , Bloomberg

(Bloomberg) -- Londoners are poised to have to pay an extra 20 pounds ($26) a year in tax over the next three years as talks to secure a bailout of the capital’s pandemic-hit public transit system falter.

In a statement on Wednesday, Mayor of London Sadiq Khan said the government is “holding London to ransom,” by refusing to give more funding to Transport for London, whose finances were battered by a sharp decline in passenger numbers during the pandemic.

“To help save TfL from collapse and to safeguard London’s economy, we have been left with no alternative but to plan to increase council tax,” Khan said.

The Labour politician has been locked in a battle with the Conservative-controlled government, which wants him to raise more cash from Londoners. Khan -- who came to office in 2016 after pledging to freeze fares -- has already been forced to increase ticket prices once after TfL received emergency government funding earlier in the pandemic.

The mayor said further fare increase would be “unfair and counterproductive” and deter people from using the services. He wants the government to hand TfL the 500 million pounds a year he says Londoners pay in vehicle taxes.

Khan has previously warned that bus services would be cut by a fifth and subway services by nearly 10% without further government funding.