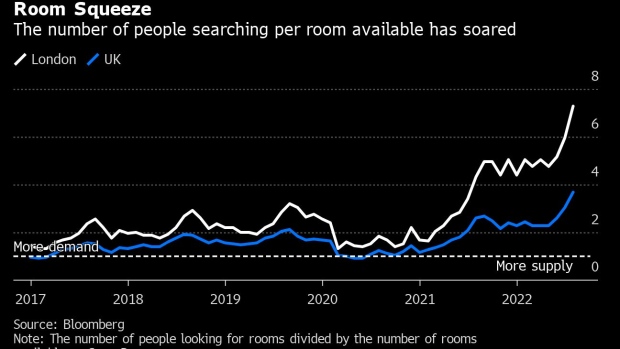 Rows of residential terraced property in the Crystal Palace area in London, U.K., on Tuesday, Feb. 1, 2022. U.K. house prices registered their strongest start to the year since 2005 but the property market is set for a slowdown as the cost of living crisis intensifies, according to Nationwide Building Society. Photographer: Chris J. Ratcliffe/Bloomberg , Bloomberg

(Bloomberg) -- London’s housing crisis is spreading, with a record surge in the number of tenants looking for rooms to rent far outstripping the places available.

The trend, mirrored across the UK, reflects a jump in house prices and interest rates, which have made it less profitable for landlords to rent out their properties. It also shows record demand from people looking for space in the capital as they return to offices and universities.

Data compiled by SpareRoom, a website that matches people seeking roommates, shows that the number of prospective tenants has more than tripled to 106,000 since the pandemic lockdown of early 2021. The number of rooms advertised has declined over that period to less than 15,000.

“The archetypal young professional, who worked at home from their parents’ place and saved money on rent, is now going back to living in real places,” said Yolande Barnes, chair of University College London’s Bartlett Real Estate Institute. “There’s an element of pent-up demand.”

The squeeze on those seeking a room represents one of the constraints holding back the UK economy. Businesses complain they’re struggling to find staff to fill jobs and are having to pay people more.

Prime Minister Liz Truss’s government also is roiling the market indirectly through its tax-and-spend program. Chancellor of the Exchequer Kwasi Kwarteng last month announced a £161 billion stimulus program including tax cuts and aid for households struggling with energy bills, saying government borrowing will rise to pay for the program.

Those measures will stimulate the economy at a time when the Bank of England is trying to rein in inflation from its highest in 40 years. The Truss-Kwarteng package sent borrowing costs spiraling and resulted in banks pulling mortgages off the market, straining the affordability of property.

“For a lot of people, the products that they were relying on disappeared overnight,” said Rupert Hunt, chief executive officer at SpareRoom. “They will be renting for longer.”

The number of tenants seeking rooms is rising across the UK but gaining most sharply in London. Demand nationwide only surpassed pre-pandemic levels in July, SpareRoom data shows. In London, more than seven people are actively looking at each room available. That’s roughly double the rate of almost four people in the rest of the country.

The surge in demand reflects students and professionals flooding back to London. Some moved out of the capital in the pandemic and maintain a room in the capital a few days a week for when they must appear in offices. Others are studying or working in low-paying jobs, especially hospitality, which bounced back sharply from lockdown.

The supply of rooms if anything is tightening despite that demand. A survey by SpareRoom found that 16% of landlords were looking to leave the rental market because of increases in costs and lower profit. Many have also quit the market in recent years after former chancellor George Osborne removed tax incentives.

Even with rents increasing, the rise in interest rates as well as maintenance means the return for many landlords is not worth it, according to Nathan Emerson, chief executive officer at Propertymark, a professional group representing estate agents.

“What the rents haven’t done is doubled in price like mortgage payments are doing at the moment,” Emmerson said.

Some property owners are converting flats into short term rental units, seeking to boost revenue and circumvent some of the rules facing landlords. The number of homes listed on Airbnb Inc. jumped 10% since last year according to data compiled by Inside Airbnb. That also counts a rebound in the number of tourists visiting London.

Also in the mix: People who have a place with outdoor space aren’t willing to risk moving into a market where it’s so difficult to find another home.

“There’s a value now on more space, which wasn’t there before, and people don’t want to give it up,” Emerson said. “If tenants have got a good property, it’s got the outside space, it’s got the accommodation they need, they’re not going anywhere, they’re going to stay.”

There has been an increase in the number of live-in landlords offering taking in lodgers. That may reflect the cost-of-living crisis and rising energy prices, putting pressure on people to find help to pay the bills.

The number of homeowners looking for lodgers jumped 18% in August, according to the SpareRoom data.

“If you are short on money, and worried about bills and the cost of living and have a spare room, that’s your single biggest resource,” said Hunt.