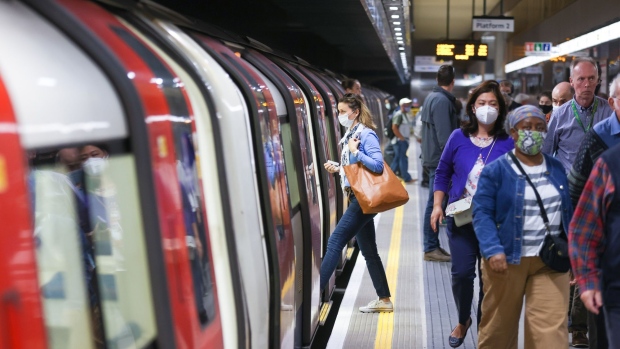 A passenger boards an underground train at Battersea Power Station on the extension of the Northern Line on the London Underground network in London, U.K., on Friday, Sept. 24, 2021. The first major extension of London's Tube system in decades -- a 1.1 billion-pound ($1.5 billion) project that began about six years ago -- finally came into fruition on Monday. , Bloomberg

Drivers for London’s underground rail network said they will strike on Friday after failing to resolve a scheduling dispute over the restoration of overnight services.

The 24-hour walkout starts at 4:30 a.m. on Nov. 26 and will affect some of the busiest sections of the London Tube network, including the Central, Jubilee, Northern, Victoria and Piccadilly lines, according to a statement Thursday from the RMT union.

Train drivers have demanded Transport for London restore dedicated Night Tube staffing, which was dismantled when overnight services were halted because of the coronavirus pandemic. Those drivers are now part of the wider rotation, and TfL has said it plans to keep them there.

Forcing other drivers to work night and weekend services will “wreck” their work-life balance, according to the union.

In a statement, TfL said it is seeking talks Thursday to avoid the disruption. It said it has assured the union there will be no job cuts and that its proposal offers flexibility for drivers, with a limit of four night-shift weekends per year.

The restoration of the Night Tube, which runs in the early hours on the weekends, has been a key demand for businesses such as bars and restaurants that were among the hardest hit by Covid-19. Service was due to restart on Saturday on the busiest Central and Victoria lines.

The union said it plans further strikes on night-time services on the lines every weekend through December.