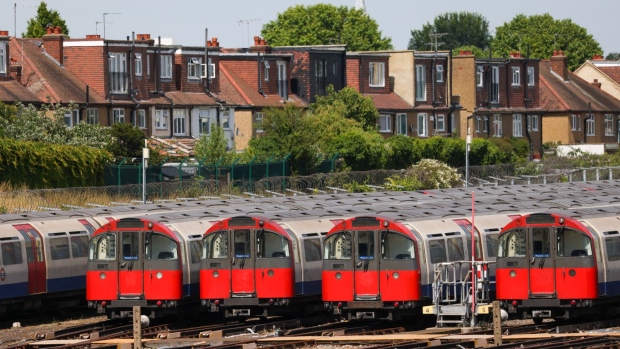 (Bloomberg) -- London’s subway network largely ground to a halt on Friday as workers went on strike, bringing more disruption to Britain’s embattled transport system and forcing people to work from home where feasible.

The one-day action falls between national rail walkouts on Thursday and Saturday, and coincides with the start of a two-day protest by bus drivers in west and southwest London. Transport for London, which oversees the subway, known as the Tube, asked commuters to avoid travel if possible.

The National Union of Rail, Maritime and Transport Workers said Tube employees are striking over “attacks to pensions and jobs.”

Britain’s rail industry has been hit particularly hard by labor tensions as spiraling inflation spurs demands for higher pay, even as the government presses companies to modernize and trim costs to reflect a drop in commuting after the Covid crisis. The ability of many people to work from home may blunt the impact of the Tube strike, as it has previous transport walkouts this year.

There’s been little sign of progress toward a resolution of the increasingly rancorous confrontations, raising concern that the sporadic stoppages could keep recurring, undermining the economy.

The RMT, which also organized the surface-rail strikes, along with the Transport Salaried Staffs’ Association, has accused Transport Secretary Grant Shapps of blocking a deal to resolve workers’ issues.

The Department for Transport disputed Shapps’s involvement, and said it’s up to unions and employers to engage in “meaningful talks.”

Shapps blamed union chiefs for failing to present settlement offers to their members. “It’s time for the union bosses to get out of the way and put the deals on the table,” he told Sky News on Friday.

TSSA said that it has heard nothing from train operating companies since the offer of an “insulting” 2% pay rise, but remains open to discussions. It added that negotiations are continuing with state-backed track and stations owner Network Rail Ltd., amid “hope the gap between us can soon be closed.”

The labor actions come against a worsening economic backdrop. Inflation hit a four-decade high of 10.1% last month, driving up the cost of everything from food to energy and clothing.

The Bank of England expects price growth to top 13% in the coming months, sharpening the pain for consumers whose real wages are falling at a record pace. Consumer confidence fell to a record low this month.

The unrest hasn’t been confined to trains and buses. Dockworkers at Felixstowe, the largest UK container port, will stage an eight-day action from Sunday, while 115,000 Royal Mail Plc postal workers begin a series of strikes on Aug. 26. Barristers have staged walkouts in England and Wales and even nurses are planning to hold a strike vote.

Still, there were some bright spots. On Friday, the GMB union said that security staff at Leeds Bradford airport had suspended a three-day strike planned for next week to consider a new pay offer.

(Updates with TSSA comment on state of talks from ninth paragraph)