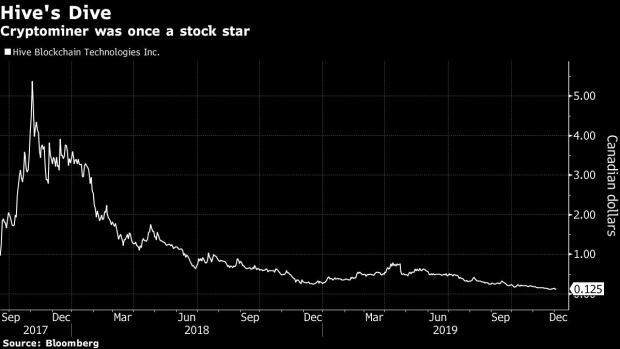 (Bloomberg) -- Hive Blockchain Technologies Ltd. was an overnight stock sensation when it became the first cryptominer in the world to trade publicly. Two years later, abandoned by the last analyst covering it, Hive joins the list of flame-outs on Canada’s junior stock exchange.

PI Financial dropped coverage of the Vancouver-based cryptominer because the company “no longer meets our coverage criteria,“ analyst David Kwan said in an email. The stock closed Tuesday at 12.5 cents in Toronto, a far cry from its 2017 intraday peak of C$6.77.

Hive’s opening on the TSX Venture Exchange in September 2017 was one of the most spectacular debuts in Canada, offering investors a way to tap into a cryptocurrency fervor sparked by Bitcoin’s bull run. Its share price tripled on the first day and soared more than 2,000% in the weeks that followed. It hit a market value of C$1.9 billion ($1.4 billion) at one point, making it one of the largest blockchain-related companies anywhere.

Easy listing rules on Canada’s junior exchanges have made the country a launchpad for the next big thing -- at the time of Hive’s debut, bitcoin miners, lithium stocks and marijuana start-ups were all the rage. The exchanges can spark early-stage winners and overnight millionaires as stocks soar, but they can also open the door to blatant stock promotion, murky disclosure and spectacular volatility. Liberty One Lithium Corp., West High Yield (WHY) Resources Ltd. -- which, like Hive, experienced blistering run ups in 2017 -- are now penny stocks trading at a fraction of their peak.

Hive also benefited from the early backing of Vancouver mining maverick Frank Giustra, as well as $750,000 in paid online promotions. At the cryptominer’s peak in 2017, Giustra told CEO.CA, a site popular with retail investors, that his “primary and only concern” was to build the value of Hive, typically a three- to five-year exercise. In a disclaimer below the article, the interviewer Tommy Humphreys stated that he owned shares of Hive and could “be considered extremely biased” about the companies he features.

Giustra didn’t immediately respond to a request to his office asking if he’s still involved in Hive and how he sees its prospects.

To contact the editors responsible for this story: David Scanlan at dscanlan@bloomberg.net, Steven Frank