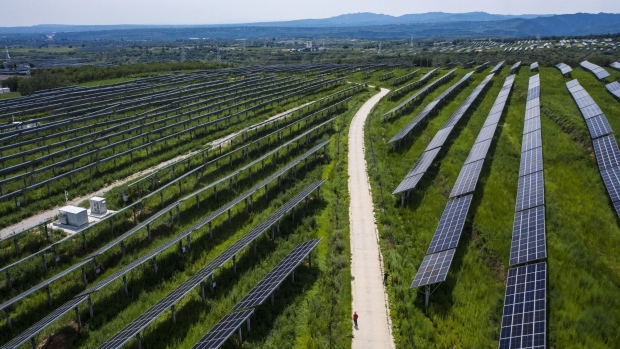 (Bloomberg) -- Longi Green Energy Technology Co., the world’s largest solar company, said that the US Commerce Department’s initial findings on Chinese companies circumventing tariffs will not affect the company’s operations nor will it change its plans for the American market.

The US Commerce Department released preliminary findings on Friday that Chinese solar manufacturers including Longi, Trina Solar Co., Canadian Solar Inc. and BYD Co. are evading decade-old tariffs by assembling equipment in four Southeast Asian countries  -- Cambodia, Thailand, Malaysia and Vietnam -- before shipping to the US.

Longi said in an emailed statement to Bloomberg that the initial findings will not “materially affect” its production and operations in the short term, given the 24-month freeze on new tariffs for solar imports from the four Southeast Asian countries announced by the Biden administration in June.

The Commerce department is continuing the investigation, which could lead to a different outcome when the agency issues its final determination next May. Longi said given the results are only preliminary, and the Commerce department will conduct an on-site audit in the next few months, the company will continue to offer materials to work toward a “better development of the final verdict.”

“We will actively provide evidence that shows we are compliant with US trade law and not circumventing,” the statement said.

Longi is also working on building more local manufacturing in other countries amid rising demands in different regions, which includes “further improving the manufacturing and supply chain system for the US market,” according to the statement.

“No matter what the final result is, it will not affect the company’s medium and long-term planning in the US market,” the company said.