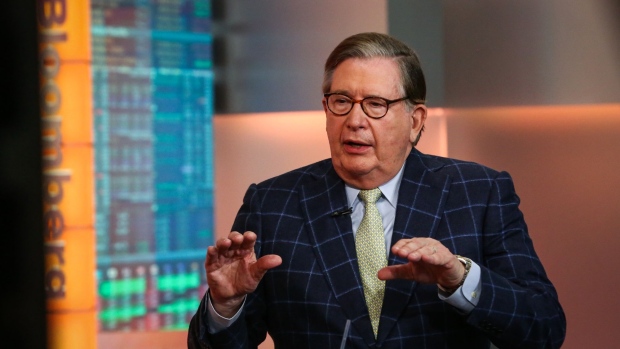 The first half hour of our discussion went about as expected. Even though the coronavirus pandemic has led to unprecedented Federal Reserve interventions and fiscal relief efforts, Hunt insisted it was mostly a continuation of what he’s seen for years. Essentially, piling on more debt today, not to boost future productivity but just to keep the economy afloat, will lead to decades of slow growth and potential disinflation. For now, the Fed looks invincible to many investors — Hunt would remind them that the central bank’s previous quantitative easing episodes did little to sustainably lift growth or inflation. The policy response this time isn’t all that different, Hunt says. It’s just larger because the downturn is more severe.

Then, I asked about Modern Monetary Theory and other novel policy ideas, like direct monetary financing. That’s when his tone shifted to what he sees as a “great risk” in the years ahead.

What follows is a lightly edited transcript of our conversation:

Brian Chappatta: The Treasury is issuing a record amount of debt and the Fed’s balance sheet has grown by $3 trillion. Has this changed your thinking at all around the interplay between debt, growth and inflation?

Lacy Hunt: The measures taken to ameliorate the recession, in terms of trying to help people in distress, while they’re popular and humane, they’ve resulted in a massive increase in the debt overhang. The pandemic will eventually go away, but the debt will remain. It’s been my view that over-indebtedness ebbs economic growth. Debt is a double-edged sword: It’s increasing current spending in exchange for a decline in future spending unless it generates an income stream to repay principal and interest.

We had four secular peaks in total debt to GDP. The 1870s, 1920s and 30s, 2008-09, and we’re going to set a new peak this year, which will take out the peak in 2008-09. The debt surge reflects both a rising debt and a decline in GDP. In the three earlier instances, the inflation rate fell very dramatically. We now have a new secular peak in debt to GDP occurring within 12 years of the prior secular peak, whereas before they were decades apart. That’s massively disinflationary.

BC: What do you make of the Fed shifting its stance to encourage an overshoot of its 2% inflation target?

LH: Inflation is a complex subject. There’s no single variable that determines inflation, but according to the figures of the Congressional Budget Office, the output gap will be a record this year and we will have a deflationary gap. In other words, potential GDP will be well above real GDP. And according to the CBO, we’re going to have a deflationary output gap through 2030. I feel that’s a solid forecast. This economy is going to come out at a very slow rate, and with the massive output gap, the velocity of money declining and this massive debt overhang, the risk is that the inflation rate goes down to the zero bound and probably crosses through it.

What the Fed says is interesting, but it doesn’t change this powerful dynamic.

BC: How do you square that view of low inflation and slow economic growth with what we’re seeing in markets today?

LH: When the Fed initiated QE1, QE2 and QE3, folks said those policies were very inflationary. There is a liquidity effect of what the Fed is doing, and the liquidity effect can be very powerful over the short term. But ultimately the increase in the money supply did not follow through after the rounds of Fed purchases of government securities because the banks couldn’t utilize the reserves, they didn’t have the capital base to make the loans, they had to charge a risk premium in an environment in which the risk premium was rising very dramatically and the borrowers couldn’t pay the risk premium. There was no secondary follow-through in terms of money supply growth, and the velocity of money fell and the growth rate fell back after a transitory rise. And I don’t really see this as any different.

Keep in mind, when the Fed comes in barrels open like this, the program initially looks successful because it unblocks what problems existed in the markets. But it’s the job of the economist to understand the unintended consequences. When the Fed comes in and they have this tremendous success, which gives the appearance that the inflation process is starting, they thwart a couple of important mechanisms that make the free enterprise system work: creative destruction and moral hazard. The first-round effects of the Fed look effective, and they’re widely hailed, but they make the economy even more overleveraged than it was before and credit is allocated to those who are not really in a position to generate economic growth from it. We’ve seen numerous similar programs in Japan and Europe and it looks like the central bank has the capability to do whatever it takes. They certainly have the ability to calm and reliquify markets, but those actions then compound the underlying problem, which is the extreme over-indebtedness. You get a transitory boost, you get a liquidity effect, but that liquidity effect runs out very quickly.

To my way of thinking, the government expenditure multiplier is slightly negative after three years. It’s slightly positive for a while, but that period of time only lasts for one to two quarters. Then the debt dynamics take hold and the growth rate falls back and the inflation rate goes with it. In the meantime, this period of weak economic growth is becoming ever-extended, and that has consequences of its own.

BC: This is usually the point at which I ask, how do we get out of this?

LH: The problem is people want a financial transaction to cover the problem. They want greater levels of debt — in other words, we’re going to try to solve an indebtedness problem by taking on more debt. Japan has tried many, many heroic measures to try to pull themselves out. Great results were promised.

The possibility exists that technology could step forward, and there are some smart people, like Bill Gates, who think technology will save us. But I think the technology answer has been provided to us by Dr. Robert Gordon at Northwestern. He said in our period of great growth from 1870 to 1970, we had transformative, revolutionary inventions. The combustion engine, modern sanitation, electricity, modern communication, pharmaceuticals and chemicals. Each one of those things enhanced the demand for labor and natural resources. Think about the natural resources and labor that were require to effectuate the benefit of the combustion engine. It led to the assembly line, complex supply chains, and we had to develop the highway infrastructure.

The technological changes today are more evolutionary, not revolutionary. The production function is one of the most fundamental relationships in all of economics, and it’s telling us we’re facing a period of difficult growth. Given these other circumstances, it’s going to be one in which the inflation rate is going to be trending down, possibly at a much greater risk of deflation than inflation.

BC: Lastly, I want to ask you about the rise of Modern Monetary Theory within economics, and some proposals to have the Fed give money directly to individuals.

LH: The great risk is that we become dissatisfied with the way things are, and either de jure or de facto, the Federal Reserve’s liabilities are made legal tender.

The Federal Reserve as it’s constituted today can lend but it cannot spend. Now, they’ve done some things that are different from what the Federal Reserve Act said under the exigent circumstances clauses, but so far they’re lending. They’re not directly funding the expenditures of the government in any meaningful way. But there are folks who want to use the Fed’s liabilities for that purpose.

When the Fed buys government securities, all that really happens is you switch to the government having a one-day liability which the banks are holding.(1)And those deposits that the banks own, which have gone up sharply as a result of the Fed buying, are not legal tender. Now, the banks could use them to make loans, but they’re not doing that. Loans are coming off very sharply because you have to have this interplay between the banks and their customers, and the risk premium has to be accounted for.

There are folks who want to make the Fed’s liabilities legal tender. Now, if that happens, then the inflation rate would take off. However, in very short order, everyone would be totally miserable because no one would want to hold money. You would trigger Gresham’s Law — people would only want to hold commodities they can consume and commodities that can be traded for others.

But there is that risk that you could use the Fed’s liabilities to pay directly. The Bank of England has made a small move in that direction — they say it’s temporary. There are others that want to try that because they’re frustrated with the fact that issuing the debt is not getting the job done. So we could significantly alter the whole structure of the U.S. economy. But if you use the Fed’s liabilities for directly funding goods and services, the consequences could be very extreme and very quick.

(1) MMT economists recognize this as well. Hereis how Stephanie Kelton described it: "Printing money simply means that overnight central bank liabilities earning the central bank’s target rate replace, say, three-month government liabilities earning roughly the central bank’s target rate. And if the Fed doesn’t pay interest on these reserve balances, then that simply means it wants its target rate at zero. Overall, there’s little difference in terms of macroeconomic impact whether the government sells its securities or prints money because the latter isn’t actually a thing in the real world."