Michigan Governor Gretchen Whitmer has stood out as one of the most vocal opponents of Enbridge Inc.’s Line 5 project, which is the state’s main source of home heating fuels. Now, however, she’s declared a state of emergency amid a bitter cold snap in her state – and is warning that a spike in energy demand for home heating fuels like propane has put a strain on state-wide distribution.

“While I am confident that our state has the energy supply we need to get through these cold winter days, we aren’t taking any chances after what happened in Texas this week,” Whitmer said in a Saturday statement. “All of Michigan’s neighboring states, and the majority of states in the nation, are under some form of federal or state energy emergency declaration.”

Under the terms of the order, Michigan will temporarily suspend restrictions on commercial driver hours to ensure propane can be delivered in an expedient manner.

In an emailed statement to BNN Bloomberg, Enbridge underscored the importance of Line 5 to the Michigan market, warning the state would face daunting propane shortages if the project was ever shut down.

“It is important to note that Line 5 helps meet more than half of Michigan’s propane needs,” the company said. “Without Line 5, the State would face an immediate daily shortage of hundreds of thousands of gallons of propane.” 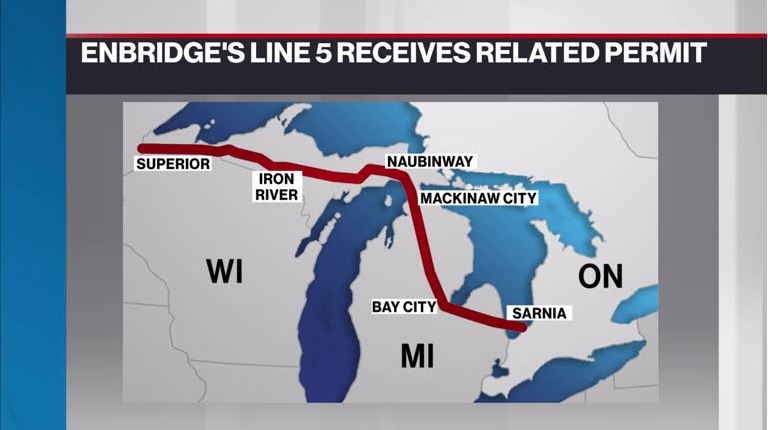 Enbridge Inc.’s Line 5 pipeline delivers about 65 per cent of the propane consumed in the state’s upper peninsula, and 55 per cent of Michigan’s total supply.

Last November, Whitmer moved to revoke the pipeline’s permit, arguing the project – especially a section running beneath the Great Lakes through the Strait of Mackinac - presents an “unreasonable risk” to the state.