Looking beyond the pandemic to keep you breathing easier - BNN Bloomberg
{{ currentBoardShortName }}
Markets
As of: {{timeStamp.date}}
{{timeStamp.time}} 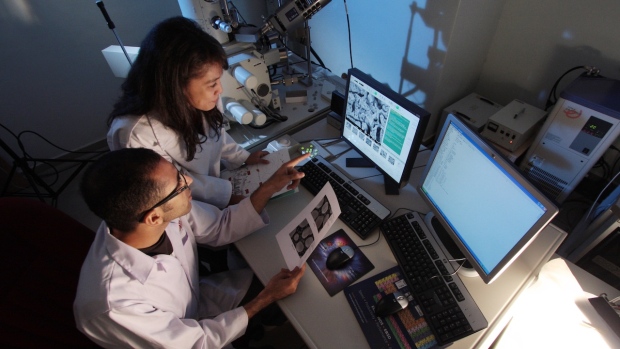 As scientists around the world work feverishly to find solutions to stop the spread of the COVID-19 virus, Algernon Pharmaceuticals Inc (CSE: AGN | OTCQB: AGNPF | XFRA: AGW), a Vancouver clinical-stage drug development company, is looking beyond the pandemic to keep you breathing easier, literally.

Medical researchers are reporting that recovered coronavirus patients are likely to be more at risk of developing chronic, progressive lung scarring which reduces the capacity of the lungs to transport oxygen into the bloodstream effectively.

Dr. Owen Tsang Tak-yin, medical director of the Infectious Diseases Centre at Princess Margaret Hospital in Hong Kong explains, “In some patients, lung function could decline by about 20 to 30 per cent after recovery.”

Tsang and his team are now delving further into the long-term effects on recovered COVID-19 patients, such as whether they would develop Idiopathic Pulmonary Fibrosis (IPF), a condition where lung tissue hardens, and the organ does not function properly.

Generally, IPF manifests itself with unusual shortness of breath during physical exertion that becomes permanent, a dry cough and loss of endurance during daily activities.

Dr. Charles Dela Cruz of the Yale University School of Medicine concurs with the findings in Hong Kong stating in a recent interview that “Patients with impaired or compromised lung conditions such as asthma, idiopathic pulmonary fibrosis, and cystic fibrosis are at particular risk for COVID-19 with worse outcomes.”

“At Algernon, we focus on finding new uses for well known, proven and safe medicines. Our scientists search out connections between safe and proven drugs already in use to be repurposed for new diseases they could treat.”

This is where the expertise amassed at Algernon Pharmaceuticals comes into play.

According to Christopher J. Moreau, CEO of Algernon Pharmaceuticals, IPF has an estimated prevalence of 13 to 20 per 100,000 people worldwide.

“At Algernon, we focus on finding new uses for well known, proven and safe medicines. Our scientists search out connections between safe and proven drugs already in use to be repurposed for new diseases they could treat,” explains Moreau.

Analogously, that is like going to a vintage store, finding an old door frame and turning it into a coffee table, which we know to be up-cycling.

With the current crisis, Algernon has honed in on ‘up-cycling’ its repurposed drug compound NP-120 aka Ifenprodil, as a possible treatment for IPF, acute lung injury, chronic cough, and coronavirus (COVID-19).

NEWS RELEASE: We believe that Ifenprodil, a previously approved drug with a known safety history, has the potential to be an effective treatment for #COVID19.

Evidence demonstrated that it may protect the lungs by reducing damage caused by #ALI: https://t.co/GG2zZL5v5u$AGN.CN pic.twitter.com/yNXCPae0ri

But what exactly is Ifenprodil, and how does it work? This is a generic neurological drug, originally developed in the 1970’s by global health giant, Sanofi, and approved for use in South Korea and Japan. It also helps stimulate blood circulation.

“Algernon’s investigations of Ifenprodil for IPF have been very encouraging,” says Moreau.

The company has found that:

“As a result of our research, Algernon has decided to expand its Ifenprodil clinical program to include potential treatments for acute lung disease and COVID-19,” notes Moreau.

He continues, “We are confident that Ifenprodil, with its strong safety history, has demonstrated evidence it may be protective of the lung by reducing the damage that can be caused by acute lung injury.”

Buoyed by the data, Moreau and his team have filed a meeting request with the U.S. FDA for the treatment and prevention of acute lung disease and acute respiratory distress syndrome associated with coronavirus infections.

The company has also appointed Novotech as the contract research organization (“CRO”) for a planned physician-initiated study of Ifenprodil for COVID-19 patients in South Korea.

Novotech, which has been instrumental in the success of over a thousand clinical trials for biotechnology companies, has also identified three physicians to conduct a feasibility study in Australia for an Ifenprodil COVID-19 trial.

Moreau credited his company’s scientific rigour and fundamental business model to Dr. Mark Williams, the company’s CSO. Williams is also heading up Algernon’s rapid escalation in initiatives to repurpose Ifenprodil for utilization in immediate phase 2 clinical trials by researchers for the treatment of COVID-19.

While drug repurposing has been around for a while, the world woke up to it after U.S. President, Donald Trump named two anti-malarial drugs as potential treatments for COVID-19.

With an experienced management team and a globally recognized medical advisory board, Algernon’s business model involves getting a drug to market without the long journey of discovery and preclinical development.

“Our drug repurposing strategy can save up to eight years of pre-clinical research, multi-millions in research and development costs, a reduction in investment and risk, shorter research periods and a longer active patent life,” notes Moreau.

“95 per-cent of new drugs fail before they reach human trials at an average cost of a few million per compound.”

“We take safe approved genericized drugs, screen them in globally accepted animal models for new diseases, file new intellectual property rights and then efficiently move them into off label phase 2 trials in the country where they were originally approved.”

He adds, “Once a signal is established in a phase 2 human trial, the company will begin to advance the repurposed drug through a U.S. FDA registration.”

“The Algernon team is now working urgently to get Ifenprodil approved for phase 2 trials in several countries so researchers can establish its efficacy as a repurposed treatment for COVID-19.”

With nearly 15 per cent of coronavirus patients suffering from severe disease and needing intensive healthcare, many countries are relying on repurposed drugs, which are already approved for other diseases and are known to be largely safe.

The company also recently awarded the contract to manufacture the active pharmaceutical ingredient for NP-120 (Ifenprodil), to U.S. based Cascade Chemistry. As work begins on the synthesis of Ifenprodil, the company will also be moving forward as soon as possible with toxicity testing, as well as the development of new formulations for parenteral injection for acute lung injury and an oral slow release formulation for IPF.