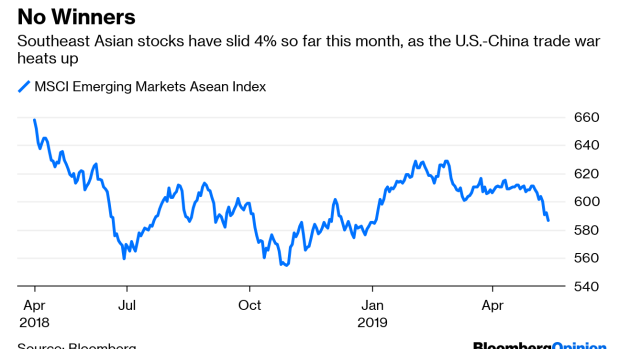 (Bloomberg Opinion) -- With some corners of the market betting the Federal Reserve will cut rates three times this year, you might expect cheers from emerging markets. Not so in Indonesia.

Earlier this week, the central bank was busy defending its currency, placing bids to prop up its government bonds to halt the rupiah’s slide. As the trade war escalates, Jakarta became the first Asian market to erase this year’s equity rally.

The damage isn’t limited to Indonesia. Across the region, stocks in the MSCI Emerging Markets Asean Index on average have fallen 4 percent so far this month.

In theory, Southeast Asia should be fairly immune to the U.S.-China trade war: Their exports don’t end up assembled and repackaged in China, and then resold to the U.S. (thereby subjecting them to indirect tariffs). If anything, the region could be one of the biggest beneficiaries of the dispute. American companies may be tempted to buy semiconductor parts from Malaysia and data-storage units from Thailand; or consider moving their factories to Vietnam; or start investing more in Indonesia, the region’s unicorn hot spot.

There’s also a decent argument that the region has more room for rate cuts, with real interest rates still high. What’s stopping Bank Indonesia from entering an easing cycle, now that Malaysia and the Philippines have cut rates? Lower benchmark rates tend to lead bond and stock market rallies. In Indonesia, the real interest rate, which excludes inflation, is still over 3%.

In a world dominated by passive fund flows, however, the reality is a lot more nuanced.

Global investors’ perception of the region quickly goes south when the China’s currency depreciates. The region’s stocks sank 17% after the People’s Bank of China, in a surprise move, devalued the yuan in August 2015. This week, the yuan flirted with the psychologically important level of 7 per dollar, reviving questions about whether Beijing would weaponize its currency as the trade war ratchets up.

Lately, Southeast Asia’s stocks have become a yuan trade. For a clue about the direction markets will take in Jakarta or Manila, look no further than the PBOC’s daily guided yuan rate. The correlation coefficient between the Chinese currency and the region’s stocks rose to 47 percent this week. Can’t short yuan? No problem. Sell the rupiah forward or the Jakarta Composite Index instead.

Since most foreign investors are dollar-based, they get nervous as the yuan gets cheaper. So when they offload funds benchmarked against the MSCI Emerging Markets Index – with good reason, given China makes up one-third of it – Indonesia gets sold off, too. Of course, fears about competitive devaluation aren’t unfounded. As the global trade pie gets smaller, the region’s most avid exporters, such as Vietnam, have the incentive to devalue along with the yuan.

It’s during tense times like these that we see the depth of an economy’s policy toolbox. This week, the PBOC can still afford a wait-and-see attitude: Few traders dare to challenge the central bank’s ability to reopen its liquidity tap by going mega short on China.

Indonesia, on the other hand, runs a structural current account deficit – and just posted its widest trade deficit on record. The Joko Widodo government is so short on cash that it has been asking state-owned enterprises to take the financial burden of building much-needed infrastructure. With so much turmoil in global markets, the central bank can forget about rate cuts when it meets later Thursday.

While it’s tempting to look for winners in this trade war, there really aren’t any. Southeast Asia is now sitting in the crossfire between China and the U.S.