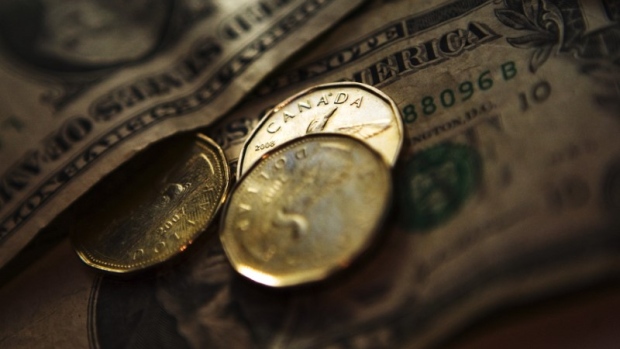 TORONTO - The Canadian dollar is likely to weaken over the coming months, a Reuters poll showed, as the Bank of Canada falls further behind the Federal Reserve on interest rate hikes due to an uncertain outlook for NAFTA and tighter domestic mortgage rules.

The loonie, which on Thursday touched its strongest since Oct. 20 at $1.2490, is forecast to weaken to $1.2700 per U.S. dollar in three months, the poll of more than 40 foreign exchange strategists taken Jan 2-4 showed on Friday.

The Canadian dollar strengthened to a three-month high against its U.S. counterpart on Friday after stronger-than-expected domestic jobs data boosted expectations for a Bank of Canada interest rate hike this month. The Canadian economy added almost 80,000 jobs for the second month in a row in December and the jobless rate dipped to a 41-year low of 5.7 per cent, Statistics Canada said. Analysts had expected a modest gain of 1,000 jobs.

The currency has been boosted in recent weeks by a two-and-a-half-year high for the price of oil, one of Canada's major exports, and firm domestic data which raised expectations for a Bank of Canada interest rate increase as soon as Jan. 17. But analysts say the central bank is likely to wait for some uncertainties to clear before raising rates.

"The Fed looks to be more aggressive earlier in the year as compared to the Bank of Canada," said Mark Chandler, head of Canadian fixed-income and currency strategy at RBC Capital Markets. "We don't think the bank will follow through this month. We think that they'll wait and see what the outcome is of some of the trade talks."

The central bank raised rates for the first time in seven years in July and then again in September. Its benchmark interest rate sits at 1 percent, while the Fed's is in a range of 1.25 per cent to 1.50 per cent.

U.S. President Donald Trump has threatened to withdraw from the North American Free Trade Agreement with Canada and Mexico if he cannot rework it in favor of the United States. Officials from the three countries will meet in Montreal Jan. 23-28 for talks on thorny subjects such as autos, dispute settlement and an expiry clause.

The outcome is important to Canada, which sends about 75 per cent of its exports to the United States.

The Canadian dollar would need to depreciate by about five percent to offset the increase in tariff levels that a dissolution of NAFTA could trigger, said Nick Exarhos, economist at CIBC Capital Markets.

He had one of the most bearish three-month calls for the loonie at $1.3300.

The uncertain impact of tighter mortgage rules, which took effect at the start of January, on a once red-hot housing market, and past rate hikes on highly indebted consumers could also delay tightening.

But analysts say that domestic economic growth, which has slowed after rapid expansion in the first half of the year, will be helped by the lagged impact of federal infrastructure spending and the potential for higher commodity prices in 2018.

The potential for the U.S. dollar to fall after posting in 2017 its weakest annual performance in 14 years could also help the loonie recover some ground later in the year.

"We are in the early stages of a reversal in the (U.S.) dollar from a longer term secular perspective," Osborne said. "The Fed is closer to the end of its tightening cycle probably than the start."