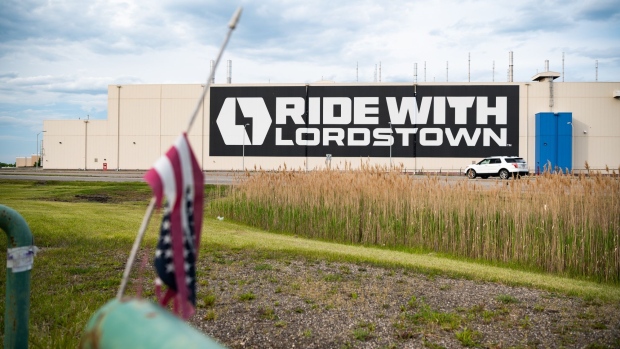 (Bloomberg) -- Electric truck startup Lordstown Motors Corp.’s shares sank as much as 19% after it pushed back a deadline to complete the sale of its Ohio assembly plant to Taiwan’s Hon Hai Precision Industry Co Ltd., also known as Foxconn.

Lordstown postponed the closing of the Foxconn transaction for the former General Motors Co. plant by four days to May 18 and said Monday it will delay investment in tooling that would lower its production costs. Foxconn made $200 million in down payments on the $230 million purchase price for the Ohio plant.

That marks the second delay of a deal that had originally been set to close last month. If it isn’t finalized by May 18 and the deadline isn’t extended, Lordstown would have to pay the money back -- and has said it does not have the cash to do so.

“We’ve had constructive discussions with Foxconn,” Dan Ninivaggi , the company’s chief executive officer, said on a conference call with analysts. “It’s a complex deal. It’s taking a little bit longer than we expected. The fact that Foxconn agreed to extend the repayment deadline is a good sign.”

The two companies are working to complete their agreement, which also includes a contract manufacturing arrangement with the Taiwanese maker of Apple Inc.’s iPhone and plans for joint development of future vehicles.

Lordstown will need to raise $150 million in cash this year, down from initial plans calling for $250 million, because of the deferred tooling investments, Chief Financial Officer Adam Kroll told analysts. But without that tooling, the cost to build the battery-powered Endurance truck will exceed its sale price.

The startup, which has no revenue yet, also on Monday signaled delays in plans for mass production of the pickup. While production will start on time in the third quarter to build the first 500 trucks, it said some of those won’t be delivered until 2023.

Lordstown, based in the northeastern Ohio village of the same name, lost 46 cents a share in its most recent quarter, which was a penny more than analysts had estimated.