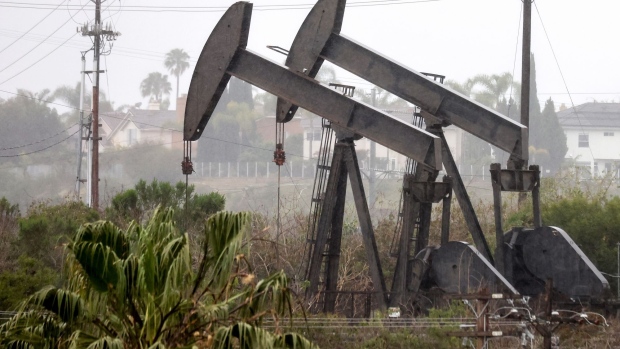 (Bloomberg) -- Los Angeles County has blocked new oil and gas drilling and will phase out of existing operations, expanding on a city-wide ban that was imposed last month.

The county’s Board of Supervisors on Tuesday unanimously passed the ordinance that takes effect in 30 days.

“We can’t afford to make the same mistakes of the past,” LA County Supervisor Holly Mitchell, who represents 2 million residents, said at a briefing. “That’s why our county is committed to developing an equitable and data-informed approach to phasing out oil drilling as we know it.”

The strategy for shutting down existing wells will be informed by an analysis of the financial, employment and health impacts, said Mitchell. The ban doesn’t include the Baldwin Hills area, which encompasses the Inglewood Oil Field, one of LA’s most productive.

A report by LA County last year found that there were 1,046 active wells, 637 idle wells and 2,731 abandoned wells within the region — most of them disproportionately located close to communities of color and lower-income levels.

The county’s ban was heralded by supporters as a historic win after years of complaints about the pollution and health issues that drilling has caused for local residents.

A similar rule approved by the city of Los Angeles in December is already facing a legal battle. This month, Warren Resources Inc. filed a lawsuit in LA Superior Court, saying the ordinance violates due process and amounts to a seizure of its property without just compensation.

While oil production has been going on in Los Angeles for a century, resistance to the industry intensified in the early 2000s. Stricter environmental regulations and the state’s climate goals have led to more opposition and higher costs for drilling.

More widely, California, the seventh-largest crude-oil producing state, is implementing a ban on new oil wells within 3,200 feet of homes, businesses, schools and other populated areas — a move that the California Independent Petroleum Association is trying to overturn via a 2024 ballot measure.