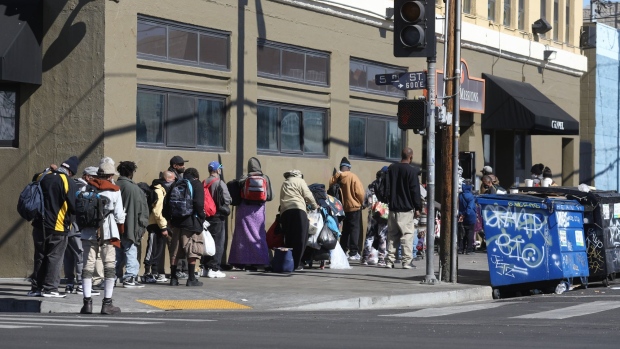 People experiencing homelessness wait in line at a mission in the Skid Row neighborhood of Los Angeles. , Photographer: David Swanson/Bloomberg

(Bloomberg) -- Karen Bass takes office as Los Angeles mayor with high hopes, having received a record number of votes, but she faces the immediate challenge of tackling a homeless crisis that has grown worse over recent years.

Bass was sworn into office on Sunday by Vice President Kamala Harris — both politicians of color who’ve made history by becoming the first women elected to hold their positions.

In her inaugural speech, Bass exhorted the city to work together to ease the homeless crisis and improve public safety. Some of her first actions as mayor will be to declare a state of emergency on homelessness and to set up an office of community safety to combat crime, she said.

“I call on the people of our city to not just dream of the LA we want, but to participate in making the dream come true,” Bass said.

After the celebration, Bass’s focus now shifts to the enormity of the task as she assumes her official duties on Monday. Inside City Hall, she’ll immediately need to deal with renewed racial tensions after Latino councilmembers were caught on tape disparaging Black people and others, sparking widespread outrage.

Her biggest policy challenge will be the city’s long-running failure to reduce homelessness. Almost 42,000 people sleep on Los Angeles streets, under freeway overpasses and in parks — even though voters have approved billions of dollars to help them over recent years. That’s up from about 26,000 people experiencing homelessness in 2015, when comparable data became available.

“It is certainly daunting, there’s no question,” said Raphael Sonenshein, executive director of the Pat Brown Institute for Public Affairs at California State University, Los Angeles. But Bass, a former community organizer and longtime politician, has an edge when it comes to working in lockstep with county, state and federal leaders.

“She probably has more coalition-building skills of any LA mayor since Tom Bradley,” the city’s first Black mayor who served five terms from 1973 to 1993, Sonenshein said.

Bass, 69, founded LA’s Community Coalition, which grew out of the crack-cocaine epidemic of the 1980s and ‘90s and still exists today. She’s Los Angeles’s first elected female and second Black mayor — and was the choice of the city’s ruling progressive establishment against billionaire businessman Rick Caruso, a Republican-turned-Democrat who spent $100 million on his campaign — almost 10 times that of Bass.

Bass won the race by nearly 10 percentage points and drew the most votes of any Los Angeles mayoral candidate in history at almost 510,000, thanks in part to voters now automatically receiving mail-in ballots at home, which boosted participation.

However, residents have reason to be skeptical that Bass, an elected political leader representing Los Angeles for almost two decades, will make progress on homelessness — even with a increased real estate tax providing up to $1.1 billion a year for housing and homeless prevention programs. In 2016 and 2017, voters also backed measures raising billions of dollars for new homeless initiatives with little visible progress.

Compared to other big metropolises like New York, Bass will find she has fewer levers of control as mayor, and she’ll share power with a County Board of Supervisors, which oversees the city of Los Angeles and the surrounding region.

Bass replaces two-term Mayor Eric Garcetti, who helped usher in infrastructure and climate improvements, but whose legacy may suffer from the homeless crisis that’s gripped the city.

Garcetti had hoped to exit city hall last year, after Biden selected him to be the US ambassador to India. That nomination has been held up by one of the many scandals that’s beset the city: claims that Garcetti knew about allegations of sexual harassment complaints against a senior aide. He denies any wrongdoing.

In a separate scandal at City Hall, powerful Council President Nury Martinez resigned in October after leaked audio revealed her making derogatory and racist comments, including remarks about the Black son of a fellow councilmember. The two other colleagues who took part in the conversation were stripped of their committee duties but Kevin de Leon has refused to resign. The other, Gil Cedillo, left after losing his seat in the June primary.

A report on diversity released by the city found that Latinos — the city’s biggest demographic group at 45% of the population — are underrepresented in the highest positions at City Hall, accounting for 28% of all appointed officials in the city. The report called for the “next era” of city leadership to continue the push for representational parity.

For all these crises, Bass will need to build out her coalition, working with allies from her time in the California legislature and as a six-term Congresswoman in Washington, DC.

--With assistance from Shiyin Chen.