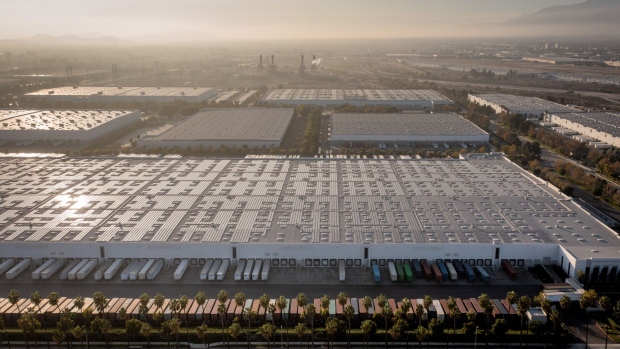 Amazon shipping containers outside a warehouse in Redlands, California, U.S., on Sunday, Nov. 7, 2021. Fallout from the global supply-chain crisis is clogging U.S. ports, pushing warehouses to capacity and forcing logistics managers to scramble for space. , Bloomberg

(Bloomberg) -- Communities in the Inland Empire, the US’s logistics mecca east of Los Angeles, are suspending new warehousing projects to examine the impact from decades of pollution -- putting the industry under pressure when it’s needed most.

This week, the city council for Pomona is set to vote on extending a temporary halt on industrial developments to study the environmental impact, while the nearby city of Norco will decide whether to establish a 45-day moratorium. The actions follow similar freezes by a handful of Southern California cities like Riverside, Colton, Chino and Redlands over the past several years.

Meanwhile, a state-level bill -- which is a long-shot to pass in the legislature but gives a reading of the mood -- proposes banning large industrial construction within 1,000 feet of non-industrial areas such as schools, homes and playgrounds in Riverside and San Bernardino counties, an area that spans 27,000 square miles.

Calls for more stringent environmental monitoring in warehousing areas -- disproportionately home to communities of color -- have grown louder as supply-chain chaos pushed shipping and logistics issues to the top of the agenda in Southern California. That could deal a temporary setback to any expansion plans by major warehousing landlords like Blackstone Inc. and e-commerce behemoths such as Amazon.com Inc., as importers wrestle with how to cram in more goods with almost no empty storage space in the Inland Empire. However, Blackstone says it also stands to benefit from less new supply and increasing demand for its existing nearly 50 million square feet of warehouse space in Southern California.

“We’re trying to strike a reasonable balance between advocates for change and advocates to support the industry,” said Mark Tomich, a director with the City of Colton, which recently extended its warehousing pause through May 2023. “It’s not an easy road to ensure that all parties are satisfied.”

Much of the 40% of goods entering the US -- via the busiest ports of Los Angeles and Long Beach -- pass through the Inland Empire’s more than 1 billion square feet of distribution centers before heading out by truck and rail across country.

Once a major farming center, the Inland Empire saw the number of distribution centers skyrocket from about 160 in the 1970s to almost 4,300 in 2021, according to research from Claremont, California-based Pitzer College.

But with demand for warehouses at an all-time high, in part due to the pandemic-fueled e-commerce boom and record-setting import volumes in Los Angeles and Long Beach, some of the region’s more than 5 million residents are rethinking the impact the industry has on their communities. The region has the US’s worst levels of ozone pollution, according to the American Lung Association, putting the health of its residents at risk.

At the same time, warehouses are typically centered in lower-income and minority communities, whose residents often face increased rates of heart disease, asthma and low birth weights, according to the South Coast Air Quality Management District, an air-pollution agency. More than two-thirds of those living within half a mile of a large warehouse identify as Hispanic or Black -- compared with about 52% of the overall population in the region.

“They’re paying for the goods that the rest of the country needs,” said Susan Phillips, director of the Robert Redford Conservancy for Southern California Sustainability at Pitzer College.

With vacancy in the Inland Empire sitting at a scant 0.4% compared with as much as 5% before the pandemic, developers are racing around the clock to deliver the almost 40 million square feet in warehousing space currently under construction, according to real estate manager Jones Lang LaSalle Inc. One of the biggest projects underway is a 4.1 million-square-foot Amazon facility in Ontario, which would be among the company’s largest warehouses yet.

“Shutting things down seems to be a clumsy answer,” said Craig Meyer, president of JLL’s industrial real estate arm for the Americas. “The transportation nodes are where the people are. If you’ve got to serve 24 million people in all of Southern California, you’re going to be putting these spaces within geographically reasonable places.”

Home to more than 3,000 distribution centers -- the lion’s share in the Inland Empire --- San Bernardino was one vote shy of establishing a warehouse moratorium last year. “Why would I want to kill opportunities for our community when our community -- our minority community -- needs jobs?” said Republican Mayor John Valdivia, who opposed the measure. Groups including the Laborers’ International Union of North America, which represents construction workers in the US and Canada, also dispute the moratoriums.

Alicia Aguayo, who grew up in San Bernardino, said two of her five siblings had respiratory issues, which she blames on emissions from trucks and nearby rail yards.

“Of course the community wants jobs, but they already have asthma, and they are concerned that more warehouses are going to bring so much more bad air quality,” said Aguayo, a spokeswoman for the Empire-based People’s Collective for Environmental Justice.

The moratoriums have allowed communities to explore emission-reduction initiatives, including proposals to redesign truck routes, restrict the size of warehouses and rezone some neighborhoods to create warehouse districts. Still, they serve as “more of a pause while looking at a bigger solution,” said Rod Butler, city manager for Jurupa Valley, a city of more than 100,000 residents that now houses about 40 warehouses.

But the industry keeps growing, and for every $1 billion increase in online sales, companies need an additional 1 million square feet of warehouse space, according to CBRE Group Inc., one of the world’s largest commercial real estate firms.

“Let’s put the brakes on until we figure out what we’re doing.”

(Corrects to add potential supply and demand benefits for Blackstone in fourth paragraph.)