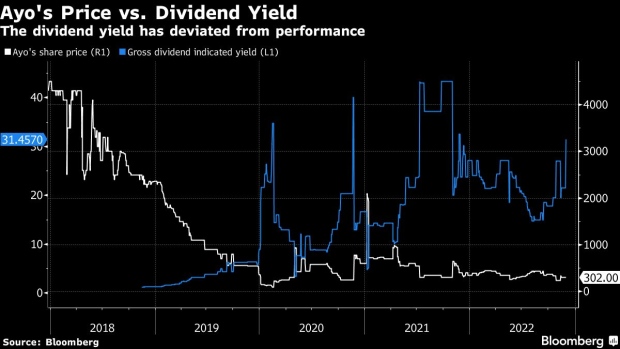 (Bloomberg) -- South African services company Ayo Technology Solutions Ltd. is in a court battle over the billions it took from Africa’s largest fund manager, banks are trying to close its accounts and it just reported a full-year net loss that widened 4% to 270 million rand ($15.9 million).

Ayo’s response? To double its gross dividend to 60 cents a share. In its 56-page full-year statement, no reason is given for the 100% increase. But Ayo’s biggest shareholder is African Equity Empowerment Investments Ltd. and that holder’s parent company is Sekunjalo Investment Holdings Pty Ltd. Sekunjalo, which is also Ayo’s third biggest shareholder, was founded and is co-chaired by Iqbal Surve.

Thanks to Sekunjalo and AEEI’s holdings in Ayo, Surve and his companies stand to receive a healthy dividend from an ailing company, which is being sued by South Africa’s Public Investment Corp. and Government Employees Pension Fund for 4.3 billion rand, plus interest. There are another four court cases over and above the PIC and GEPF’s claim, according to Ayo.

Surve is a South African businessman who is challenging moves by local banks to close his companies’ accounts. Sekunjalo’s website describes him as “a physician, entrepreneur and an ardent philanthropist” who also controls one of the country’s largest newspaper groups.

“The company has since been reconfigured into a technology holding company and will be able to continue to trade as such through the portfolio of investments it holds” even if the PIC and GEPF are successful in their application, Ayo said in its full-year earnings statement on its website.

In 2018, the PIC invested 4.3 billion rand in Ayo to back its initial public offering, valuing the technology company at 14.8 billion rand even though its assets were estimated at 292 million rand five years ago.

Ayo’s total market value is now 1 billion rand, with its share price having plunged 93% since it listed. The stock took a battering in 2018 when President Cyril Ramaphosa ordered a probe into whether PIC officials, including its former Chief Executive Officer Dan Matjila, followed procedure when it backed Ayo’s IPO. Matjila was ousted in 2018 and the probe found the PIC had regularly flouted procedures when making investments with government workers’ pension money.

“The on-going litigation with the PIC as well as the PIC voting against special resolutions to provide financial assistance to subsidiaries has affected the company’s ability to fund its subsidiaries growth initiatives,” the company said in a statement on Wednesday. “Ayo continues to seek commercial engagement with one of its significant shareholders, the PIC, to ensure continued support for Ayo’s vision.”

(Adds Ayo statement about the Public Investment Corp. in final paragraph. An earlier version of this story was corrected to show Ayo was reporting full-year results.)