CN volumes for petroleum products down 30% since blockades: Genscape

Beleaguered Canadian grain shippers, confronting millions of dollars of daily losses in the aftermath of a series of rail blockades, may face a sales logjam for at least six months.

Exporters are still paying contract penalties and demurrage costs for ships, and the backlog of grain may take until October to clear, Wade Sobkowich, the executive director of the Western Grain Elevator Association, said in a telephone interview. Delays in shipping are costing as much as s $10 million a day.

“It’s a slow road to recovery, and just because we’re not seeing any active blockades right now doesn’t mean we’re back up to normal flow and movement,” Sobkowich said. “We’ll be pulling back on sales due to the fact we have to execute on ones that are near term and on the books.” 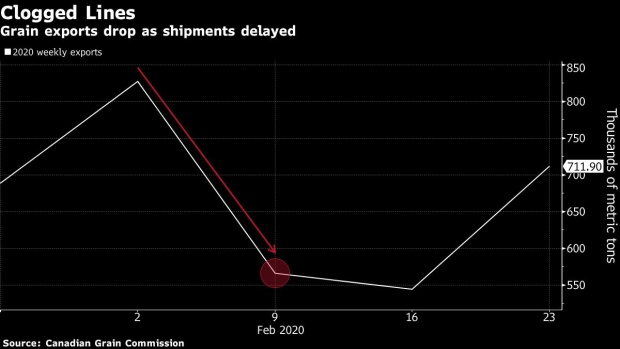 In Vancouver and Prince Rupert, 53 ships are waiting for grain, just two shy of the record in the 2013-14 crop year, when a bumper harvest clogged rail lines, said Mark Hemmes, president of the Edmonton, Alberta-based Quorum Corp., a company hired by the federal government to monitor Canada’s grain-transportation system.

Grain shipments to ports are about 1.25 million metric tons behind a year earlier, and railways need to move an extra 100,000 tons a week to catch up, Hemmes said in a telephone interview. Vessels in Vancouver and Prince Rupert are waiting for about 2.5 million tons, he said.

Companies “are going to slow their sales programs down to make sure they have the level of confidence that they can sell into the market,” Hemmes said. “This is going to take a while to clean it out.”