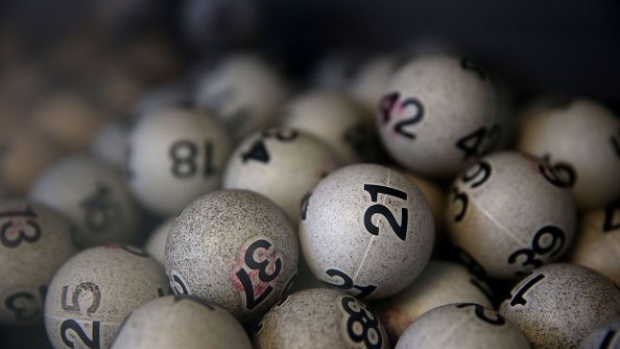 SAN LORENZO, CA - JANUARY 12: Lottery balls are seen in a box at Kavanagh Liquors on January 12, 2015 in San Lorenzo, California. Dozens of people lined up outside of Kavanagh Liquors, a store that has had several multi-million dollar winners, to -purchase Powerball tickets in hopes of winning the estimated record-breaking $1.5 billion dollar jackpot. (Photo by Justin Sullivan/Getty Images) , Photographer: Justin Sullivan/Getty Images North America

(Bloomberg Opinion) -- Have you ever thought that 535 random people off the street would do a decidedly better job than the duly elected members of the U.S. Congress? If so, you’ve been scooped by a few millenniums; the idea of selecting government officials at random, known as sortition, is neither as outrageous nor as original as it seems.

In the fourth and fifth centuries BC, some of the central organs of the Athenian government were populated by selecting random volunteers. For example, the members of the Council of 500 — whose responsibilities included developing legislation, overseeing the executive branch and managing diplomatic relations — were selected at random for one-year terms. Amazingly, it is estimated that 50% to 70% of Athenian citizens over 30 (the minimum eligible age) had served at least one term on the council. This was possible since the overall number of citizens in ancient Athens was roughly equivalent to the population of modern Rome — Rome, Georgia, that is.

During the Renaissance, sortition was all the rage. For centuries it played a key role in the process of selecting the Doge of Venice, as well as in populating the branches of the Florentine government. It was also employed widely throughout the Kingdom of Aragon, which is part of modern-day Spain.(1) Sortition actually endured as a system of government into the 20th century: San Marino’s two heads of state were selected at random from 60 councilors as recently as 1945.(2)

There's plenty of historical precedent, then, for using sortition to successfully run city states. But can sortition-based democracy scale up from tens of thousands of citizens to hundreds of millions? Perhaps.

In his masterful book “Against Elections,” David Van Reybrouck describes a modern blueprint for sortition-based democracy designed by political scientist Terrill Bouricius. Drawing on the Athenian model, Bouricius proposed a multi-body system that includes an Agenda Council (which chooses topics for legislation), Review Panels (which develop legislation) and a Rules Council (which has the power to adjust the legislative process itself). The members of these organs are chosen at random from pools of volunteers for three-year terms, during which they are paid handsomely.

The most intriguing aspect of this idea is that the authority to vote bills into law rests with yet another organ, the Policy Jury. A separate Policy Jury is assembled for each piece of legislation. Its 400 members are selected, yes, at random, but from the entire adult population rather than from volunteers; those selected are obligated to participate (and compensated for their service), much like a trial jury. Jurors only serve for a few days, during which they receive objective information about the legislative decision in question, hear arguments for and against the different options, and finally vote in a secret ballot.

Such a system would ostensibly cure many of the ills plaguing modern democracies. Lawmakers beholden to special-interest groups, donors and political parties? Check. Corruption and self-dealing? Check. Government that reflects demographic biases? Check. In fact, my recent work with Gerdus Benade and Paul Goelz shows that, when using certain statistical techniques, sortition leads to outcomes that are likely representative of a wide range of groups and opinions.

But should we trust the judgment of random people when it comes to nuanced policy questions? There’s quite a bit of evidence that we should, under the right circumstances.

In the last two decades, Ireland, the Netherlands and two Canadian provinces — Ontario and British Columbia — convened citizens’ assemblies to inform the government on electoral or constitutional reforms.(3) These assemblies, which ranged in size from 100 to 160 members, were selected (at least in part) at random. They spent between nine months and 12 months deliberating, developing proposals and voting.

The Irish experiment is especially impressive. Two assemblies, formed in 2013 and 2016, debated sensitive constitutional questions. The assemblies decided to legalize gay marriage and abortions, and their decisions were subsequently approved in national referendums by wide margins: 62% and 66% for “yes," respectively.(4) The creation of a relative consensus around such hot-button issues in the historically devout country demonstrates the power of sortition (coupled with deliberation).

Earlier this year, the Parliament of the German-speaking Community of Belgium went a step further: The legislators unanimously decided to establish a permanent Citizens’ Council, consisting of 24 citizens who are randomly selected for terms of 18 months. The council will regularly organize citizens’ assemblies, and the German-speaking parliament, in turn, is required to discuss the recommendations produced by these assemblies. It’s a historic achievement for sortition advocates, and, one hopes, a harbinger.

Admittedly, even the Belgian initiative is still a long way off from a Bouricius-style sortition utopia — and the jury is still out on whether we’d want to go that far. But it’s comforting to think that the best fix for our political chaos may be a bit of randomness.

(1) King Ferdinand II of Aragon spoke highly of the virtues of sortition. Unfortunately, he also established the Spanish Inquisition and ordered the expulsion of practicing Jews from his kingdom, so he is hardly an authority on governance.

(2) The two heads of state constitute a non-negligible fraction of the minuscule country’s population.

(3) There have been related, albeit unofficial efforts in the U.S., such as an ongoing experiment by James Fishkin and Larry Diamond, reported last month in a New York Times opinion piece.

(4) Ireland has recently convened two more citizens’ assemblies. Ironically, critics warn that they will “absolve politicians from making the decisions they are elected to take.”

To contact the author of this story: Ariel Procaccia at arielpro@cs.cmu.edu

Ariel Procaccia is an associate professor in the computer science department at Carnegie Mellon University. His areas of expertise include artificial intelligence, theoretical computer science and algorithmic game theory.