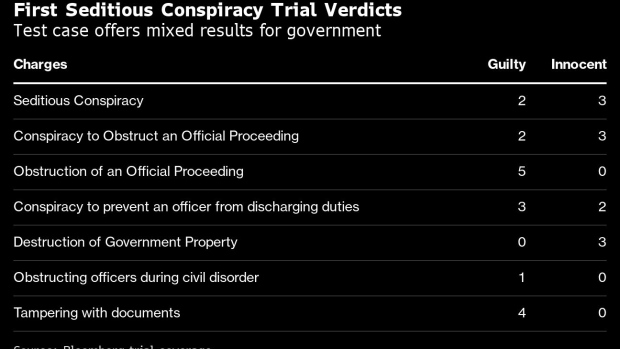 (Bloomberg) -- Prosecutors notched a key win in cases tied to the Jan. 6, 2021, attack on the US Capitol, after a jury convicted two leaders of the right-wing Oath Keepers group. A trial this week against four lower-level defendants tied to the organization may be a little more difficult.

Last month, the government tried a group of Oath Keepers accused of participating in a seditious conspiracy to forcefully stop the peaceful transfer of presidential power. While all five defendants were convicted of crimes tied to the attack, only group founder Stewart Rhodes and Florida chapter leader Kelly Meggs were found guilty of the rare seditious conspiracy charge.

Jury selection starts Tuesday in Washington for the trial of four more defendants linked to the Oath Keepers. It will be the second of three seditious-conspiracy trials planned by prosecutors following an investigation that has led to more than 900 arrests. The third will start later this month against members of the right-wing Proud Boys group.

Because jurors found only the two Oath Keeper leaders guilty of seditious conspiracy during the first trial, “it puts the government on notice that it might rethink it’s strategy and go with charges that it can definitely prove” for lower-level members, said Michael Gerhardt, a law professor at the University of North Carolina at Chapel Hill.

All five of the defendants in last month’s trial were found guilty of obstructing an official proceeding, which carries a maximum 20-year prison sentence. But the results were mixed on other government allegations.

Prosecutors won on all charges brought for tampering with documents, but lost on every destruction of government property claim. And only individuals who entered the Capitol were convicted on other conspiracy charges involving obstructing an official proceeding and preventing lawmakers from fulfilling their duties.

Most of the same charges have been levied against the defendants on trial this week: Roberto Minuta, Joseph Hackett, Ed Vallejo and David Moerschel. According to the government, Minuta, Hackett and Moerschel allegedly breached the Capitol building, while Vallejo awaited orders to deploy a “quick reaction force” of firearms.

All four were mentioned by name during the first trial, which focused on Rhodes at the center of a conspiracy to prevent Joe Biden from becoming president.

Rhodes had warned of a civil war and threatened force if former president Donald Trump failed to act to stop what the Oath Keeper founder considered to be a fraudulent election. The government showed evidence of some defendants traveling together, stashing guns in a Virginia hotel ahead of the riot and breaching the Capitol building.

During the first trial, the government played a recording of a podcast aired the morning of the riot where Vallejo threatened violence.

Prosecutors also showed images of Hackett, Moerschel, Meggs and other Oath Keepers funneling into the Capitol building together.

A second group of Oath Keepers entered the building with Minuta and Alabama leader Joshua James pushing past officers, according to government evidence. “Get these cops out! It’s our f---ing building!,” yelled Minuta. James, who pleaded guilty to seditious conspiracy, pulled an officer and yelled “Get out of my Capitol! Get out! Get out of my Capitol!” according to the government.

“The sense of entitlement that led to frustration followed by rage and violence,” Assistant US Attorney Kathryn Rakoczy said during closing arguments. “That is the story of this conspiracy.”

The government also alleged that defendants kept plotting to keep Trump in power after the riot. “You ain’t seen nothing yet,” wrote Rhodes on an Oath Keepers leadership chat. “We aren’t quitting!! We are reloading!!” messaged Meggs. “We have only [begun] to fight!” Vallejo wrote to the same chat group.

Defense attorneys have argued that the government cherry-picked inflammatory language from their clients that only amounted to puffery. During the first trial, Oath Keepers testified they traveled to Washington to provide security at pro-Trump events and stored firearms in case left-wing activists attacked or Trump invoked the Insurrection Act, which they believed would authorize them to act as a militia.

The defense team also emphasized that no witness could testify to an actual plan or order given to attack the Capitol or stop the electoral count. Oath Keepers, including two who pleaded guilty to conspiracy, described their decision to enter the building as spontaneous.