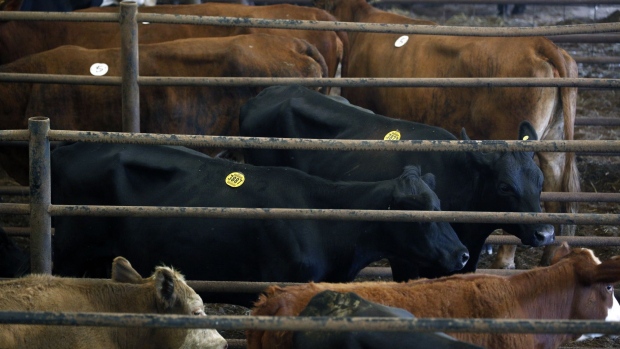 Cows stand in a holding area after being sold at auction at the Kentucky-Tennessee Livestock Market in Cross Plains, Tennessee, U.S., on Monday, July 13, 2020. The USDA raised beef projections from 260 million pounds on the month to 26.934 billion because of higher slaughter rates and heavier carcass weights, lowering the average steer price outlook by $1.80 to $106.80 per hundredweight, with lower exports and higher imports and domestic consumption, Brownfield Ag News reported. Photographer: Luke Sharrett/Bloomberg , Bloomberg

Low-methane meat is a thing now. Earlier this week, fast-food chain Burger King unveiled a climate-friendly burger it plans to offer in some U.S. locations.

The limited-supply meat comes from cows that are fed lemongrass to reduce the atmospheric impact of their methane-laden belches.

It’s an early move in what may become a race to put low-carbon labels on meat. If emissions from electricity production and transportation eventually come under control, the environmental impact of agriculture—which represents more than 9 per cent of U.S. emissions directly—may become the next front in the fight to slow global warming.

From farm-to-fork, the agricultural and livestock supply chain represents more than one-third of greenhouse gas emissions by some estimates. And meat is one of the sector’s most damaging products when it comes to the climate crisis.

Nevertheless, low emission burgers are a stop-gap, kind of like using renewable energy to extract oil and gas. A better way to reduce methane from meat is to avoid it in the first place. Until recently, that’s been much easier to do in the grocery aisle than in your portfolio.

Agricultural emissions touch almost every investment strategy. From 2015 through this year, global meat and dairy companies received a combined US$478 billion in financial backing from more than 2,500 of the world’s largest banks, lenders and pension funds, according to a report this month from U.K. campaign group Feedback.

“For the large-cap space, there are no vegan companies, so the only way to approach this is on an exclusionary basis,” said Claire Smith, chief executive officer of Beyond Investing, which created the index for the world’s first vegan exchange-traded fund, VEGN.

The fund, which screens out stocks for fossil fuels, animal cruelty and damage to wildlife, has bested the S&P 500 index since its inception in September. It also has a lower profile than most ESG funds in terms of carbon emissions, waste generation and fresh-water consumption.

It’s easier to be a vegan investor backing early-stage alternative protein startups in the private markets, but you need capital to do that, so Smith is also looking at crowdfunding plant-based food companies.

Based in Geneva, Smith started vegan investing in 2017. She wanted her work to measure up to her personal efforts, like eating vegan and putting solar panels on her roof. She sees the coronavirus pandemic accelerating the trend toward vegan food, as more people cook at home and the fragility of the meat supply chain becomes obvious to consumers.

“It’s really about health and choices,” said Smith. “Obesity, heart disease, high blood pressure and diabetes, which are all associated with eating meat, have co-morbidity with the disease.”

The “virus is also exposing all of the nasty aspects of factory farming, wet markets, slaughterhouses and meat processing plants where workers are getting sick.”

Investor interest has also swelled in plant-based and alternative meats, because consumers are finding the novelty more interesting, Smith said. “You’re seeing so many new brands come to market now with different packaging and styles and tastes,” she said. “These products can really only get more appealing.”

Emily Chasan writes the Good Business newsletter about climate-conscious investors and the frontiers of sustainability.