Industry experts don’t have high hopes for the Canadian natural gas market heading into 2018 with the AECO price environment expected to remain a challenge for producers in the country.

While the incoming winter weather had created some hope gas prices would recover, Martin King, director of institutional research at GMP FirstEnergy Securities, said previous optimism has now been "completely demolished" by the weak start to the current heating season as well as increasing concerns the problems that have plagued Canadian producers in 2017 will continue into 2018.

"Canadian natural gas prices have deteriorated significantly in recent months and now appear to be plagued by numerous problems spanning the poor start to the current winter, deliverability issues, high storage, surging supplies, erosion of market share, and very poor regional pricing," King wrote in his quarterly gas outlook report. "We have made substantial downward adjustments to our Canadian price outlook to reflect these conditions." 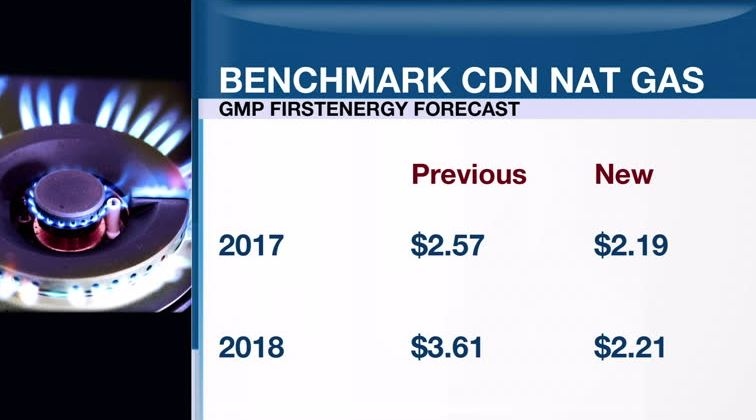 Dan Tsubouchi, principal and chief market strategist at Stream Asset Financial Management, sees low prices persisting longer than many anticipate and expects 2018 to be a tougher year for producers compared to last year.

"It's going to be like last year, but uglier," he told BNN in a telephone interview.

"The trigger here will be when investors start to look at strip prices and what it means for 2018.”

Like oil, the lack of transportation capacity for natural gas is a concern.

This past summer, maintenance on pipelines cut off some storage options and caused supplies to increase. Many hoped cold weather this winter would lead to more natural gas being burned to heat homes. That hasn't materialized and Tsubouchi expects once demand really starts to wane, the problem may get worse.

"My fear is that AECO is really bad in the spring after we get through the higher Alberta domestic demand period for natural gas. I know it's been warm, but winter is the high demand period," he said.

Tsubouchi points to TransCanada's recent investor day that had a fairly negative outlook for Canadian natural gas that he says wasn't "fully appreciated by the sell side and investors."

"The real big problem is that TransCanada doesn't see its new Alberta capacity of one billion cubic feet a day being ready until at least 2020-21. What this means is that AECO prices are in trouble for a few years," he said. 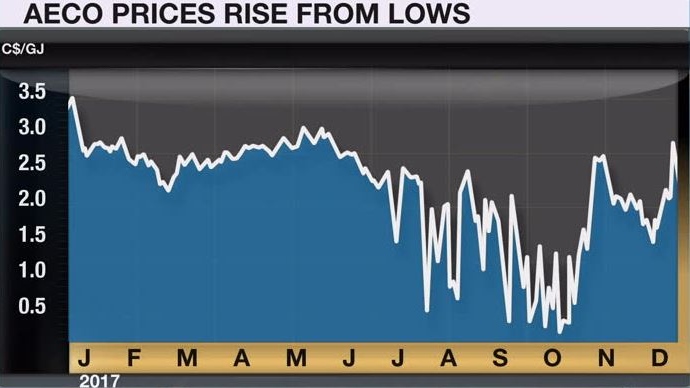 However, Tsubouchi noted there could be some positive developments for Canadian natural gas on the way that may help.

In particular, he said the Chinese government is moving quickly to increase the amount of natural gas in the country's energy mix. As a result, he expects natural gas demand in the country to be even stronger in 2018. He said that will eat into the global LNG supplies faster than many expect and will move LNG to underbalance around 2020, instead of 2025, boosting LNG markets and ultimately, B.C. LNG projects.

Tsubouchi predicts that will provide Shell the impetus to make a positive final investment decision on its proposed LNG Canada project, possibly as early as next summer. He also points to Shell's bullish outlook on LNG prices earlier this year as rationale.

A positive decision on LNG Canada is something King is watching as well.

"We think the conditions for this project, financially and globally, may be ripe for go ahead next year," King wrote in his report. "This would provide a long-desired export outlet for Canadian gas completely separate from the U.S."

King said Veresen's Jordan Cove LNG project in Oregon may provide another option for Canadian producers to reach markets in Asia. If both of these projects were to move forward with a positive final investment decision in 2018, they could be in service by 2023, representing total inlet demand of roughly three billion cubic feet a day of Canadian gas.

Possible approval of these projects won't be much help for natural gas producers right away.

"Unfortunately, these developments are five to six years over the horizon, meaning they will have no impact on the current more downbeat prospects for 2018 (and 2019?) Canadian natural gas prices," King noted.

But they would add some optimism, something Tsubouchi says would be a “game changer” for the market.

"It won't change the price of gas being sold in 2018, but it will change people’s views on the future of value of Canadian natural gas," he said.

What else to watch in Canada’s energy sector in 2018:

Pipelines: With Line 3 and Trans Mountain scheduled to be in service in late 2019 and Keystone XL expected in 2020, construction will really kick into high gear next year.

"In the last month or so here has seen some positive developments," King noted in his report. "This year, we'll see some real substantive process made on KXL and Trans Mountain and Line 3 will get close to finish line. So in 2018, we'll see some substantive and verifiable movement on front."

While that should mean more certainty for investors, it will also likely mean we'll see the opposition to these projects ramping up. Opponents have already targeted financial institutions internationally and there have been large scale protests in the U.S. Expect more of that to come to Canada in 2018.

Alberta joblessness: 2018 is expected to be another tough year for laid-off oil and gas workers. Although we're seeing Alberta's unemployment rate continuing to decline, that doesn't necessarily mean an increase in jobs.

"My impression is that's still going got be the trend," King said. "Even if companies grow, they're just going to keep the same number of people."

That means continued difficulties tens of thousands of Albertans who still haven't found work in their field.

"Especially those with very specific jobs, maybe some of those engineering jobs or geophysicist jobs because they are so specific and if that exact job doesn't come back, it might be difficult," Todd Hirsch, chief economist at ATB Financial told BNN. "My guess is that a lot of those workers have had to look elsewhere, maybe state-side, maybe some other parts of the world or they've maybe been able to shift their career and look at other sectors – maybe in software development if their skills are able to pivot in that direction."

However, Hirsch noted jobs are coming back in the energy sector, albeit lower paying jobs.

Canadian heavy oil: The heavy oil differential is expected to improve. While pipeline shortages have caused the WTI-WCS spread to soar recently, oil-by-rail will become more appealing, even with the higher cost to producers. Right now, rail companies want longer-term commitments in order to bring in the extra resources to increase capacity. With oil production increasing and no new pipelines on the near horizon, Tsubouchi said that's creating a situation where producers are going to want to commit, especially as we head into the end of spring/early summer seasonal demand for asphalt and other products.

"I expect heavy oil by rail to pick up in the Feb./March period and differentials to narrow to the cost of rail. And when it does, combined with the March/April/May normal improvement in heavy oil differentials, then that will be the trigger for heavy oil to outperform," he said.

Canadian light oil: Watch for a boost here as well.

Tsubouchi said less equity capital headed towards U.S. shale producers in 2017 compared with 2016 and there may be an opportunity for Canadian light oil, which already has pipeline connections and market penetration and "has already proven it can deliver value and return when compared to the Permian.”

"Our good Canadian light oil plays have more data than the Permian players and this will attract some capital, albeit modest, away from the U.S. shale plays as they transition to models of “value over volume," Tsubouchi said.

He added this is all about attracting capital away from the top U.S. shale plays and he thinks Canadian producers can do so.