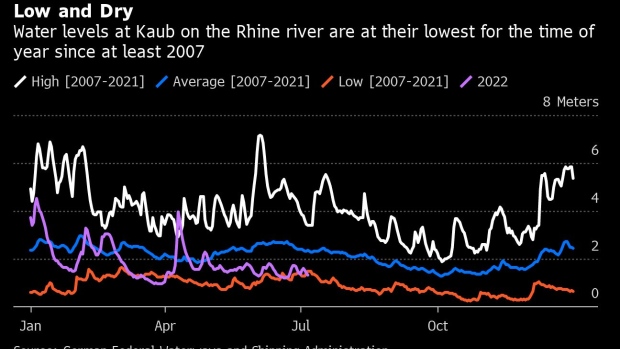 A cargo barge sails beside exposed strips of land on the River Rhine. , Bloomberg

(Bloomberg) -- Water levels on Europe’s Rhine River are again dwindling -- and this time it’s at the risk of the continent’s efforts to boost its energy security.

A heatwave has reduced parts of the river, western Europe’s most important waterway, to the lowest seasonal levels in at least 15 years. That could affect the delivery of everything from coal to oil products as the region races to stockpile energy supplies ahead of winter.

“Low water levels on the Rhine mean that barges cannot load steam coal at full capacity” for power plants in Germany, said Guillaume Perret, founder of energy consultancy Perret Associates. “This could be a double whammy for the German utilities, as they were already facing a shortage of barges.”

For now, most utilities have ample stockpiles, though that could change if the situation runs into late next month, he added.

Europe is in the grip of its worst energy crunch in decades amid heightened tensions with Moscow due to the war in Ukraine. Russia -- a major natural gas supplier -- has already cut flows to several nations, and more disruptions may be on the way. The conflict has upended trade flows as countries seek alternate fuel sources.

There are few places where that’s more evident than on the Rhine, an approximately 800-mile (1,288-kilometer) artery that runs from Switzerland to the North Sea. It’s a vital route for the delivery of goods from the bustling ports of Amsterdam, Rotterdam and Antwerp to buyers in inland Europe.

The water level at Kaub, a bottleneck point near Frankfurt, is at the lowest seasonal level since at least 2007, according to data from the German waterways administration. The situation is similar near Duisburg and Dusseldorf.

Dry spells occasionally restrict traffic on the Rhine, forcing barges to carry smaller loads. A barge with 2,500 tons of capacity loading diesel-type fuel in the Rotterdam region sailing beyond Kaub can only take on about 1,600 tons of product, maritime brokerage Riverlake said in a report this week.

“If there are low water levels in combination with limited diesel supplies, some storage tanks in Germany could run out, it happened before,” said Jelle Vreeman, a senior broker at the company. “Significant barge capacity is already taken off the market” because of the demand to cover deliveries during summer, he added.

A prolonged heatwave could create delays for winter energy supplies when the continent needs them most. High temperatures and lower-than-average rainfall are expected through next week. Scientists say this could become a continual problem in the years ahead as climate change worsens.

The stakes are particularly high for Germany, Europe’s largest economy. The nation plans to import 10 million more tons of thermal coal than usual this year to help power it through winter, saving gas for industry and heating.

The Rhine saw the transport of about 17 million tons of coal and 28 million tons of mineral oil products in 2020, both declines on the previous year, according to the river’s navigation commission.

Germany is now considering reviving dormant coal plants as power prices jump to record levels. But it’s happening at a time when barges are already in tight supply, in part because many were sold off in recent years amid a planned coal phase-out.

The re-direction of some barges to help ship grain out of Ukraine has also limited their availability in western Europe, according to Sabrina Kernbichler, lead analyst for European power at S&P Global Platts.

“The fall in Rhine water levels is starting to constrain coal supply to German units especially in southern Germany,” she said, noting the situation is manageable from a supply-security standpoint for now.

Some energy companies have been taking steps to prepare for the colder months. EnBW AG, which has four active coal power plants in Germany -- one of which is on the Rhine -- said it used the second quarter of the year to build up inventories at the facilities and now has a “significant” level of stock.

“We are monitoring the development of the Rhine levels very closely,” a company spokesperson said.