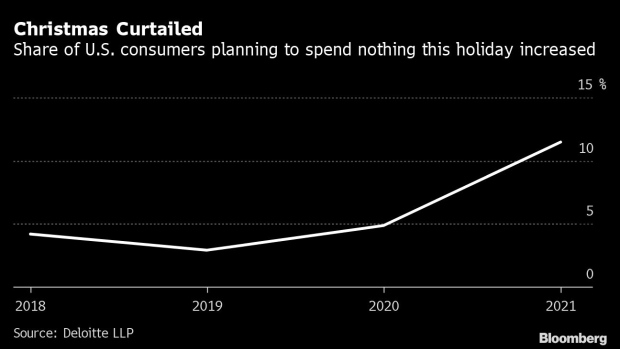 A pedestrian carries a shopping bag in San Francisco, California, U.S., on Thursday, Sept. 16, 2021. Prices paid by U.S. consumers rose in August by less than forecast, snapping a string of hefty gains and suggesting that some of the upward pressure on inflation is beginning to wane. Photographer: David Paul Morris/Bloomberg , Bloomberg

(Bloomberg) -- This Christmas season will be marked by a growing divide between high and low earners, according to a study from Deloitte LLP.

The survey, released Wednesday, shows that 11.5% of U.S. holiday shoppers say they plan not to spend anything on gifts and services this holiday. That’s up from 4.9% in 2020 and 2.9% the previous year. It’s the highest in at least 10 years, according to Rod Sides, a vice chairman of Deloitte.

For those who don’t plan to spend, almost two-thirds make less than $50,000 a year, according to Deloitte. About one in eight of the non-spenders make $100,000 or more.

The response to the Covid-19 pandemic and its economic difficulties has been bifurcated across income groups, Sides said in an interview. He cited the K-shaped recovery predicted last year by economists, where the gap between the wealthiest Americans and lower-income ones widened. “We kind of see it playing itself out in what consumers say that they’re spending,” he said.

Deloitte has forecast 7% to 9% growth in holiday sales this year. The expansion will mostly be fueled by wealthier consumers who have seen their savings rise during the pandemic. Spending among lower-income Americans, meanwhile, is expected to fall 22% compared to last year.

U.S. consumer sentiment fell in early October to the second-lowest level since 2011, as consumers grew more concerned about inflation. Higher prices will be particularly challenging for lower-income Americans.

“We’re hopeful that as we get into 2022, we’ll find that real wage growth has been there, but the challenge is that inflation has eaten up that purchasing power,” Sides said.