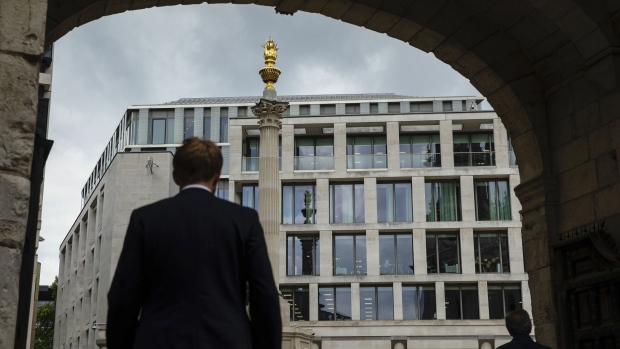 Pedestrians pass the London Stock Exchange Group Plc headquarter offices in the City of London, U.K., on Thursday, Aug. 1, 2019. LSE agreed to snap up Refinitiv in a $27 billion blockbuster deal, betting on a future dominated by data as the three-century-old exchange seeks to extend its global reach. Photographer: Luke MacGregor/Bloomberg , Bloomberg

The LSE doesn’t need to make any further major concessions to secure approval from the European Commission, according to a person familiar with the matter, who asked not to be identified.

Reuters reported Wednesday that antitrust regulators are set to approve the LSE deal, according to people. Reuters reported that the LSE had tweaked concessions to address competition concerns, without providing details of the changes.

LSE shares rose as much as 12.6 per cent Wednesday.

An approval would move the London exchange closer to sealing a transformational deal that will give the firm global scale and growth. This week S&P Global Inc. agreed to buy IHS Markit Ltd. for about US$39 billion in stock, a deal that accelerates the wave of consolidation among the finance industry’s biggest data providers as firms vie to meet surging demand for data and analytics in increasingly computerized financial markets.

Regulators previously flagged potential issues with a large market share for European government bond trading, trading and clearing of interest-rate derivatives, consolidated real-time datafeeds and desktop solutions as well as index licensing citing the possibility that rivals could be shut out from accessing important Refinitiv data.

LSE offered to sell Borsa Italiana to Euronext NV and two Italian banks to win antitrust approval. It also pledged not to discriminate against rivals in areas including interest rate derivatives and information services, people familiar have said.