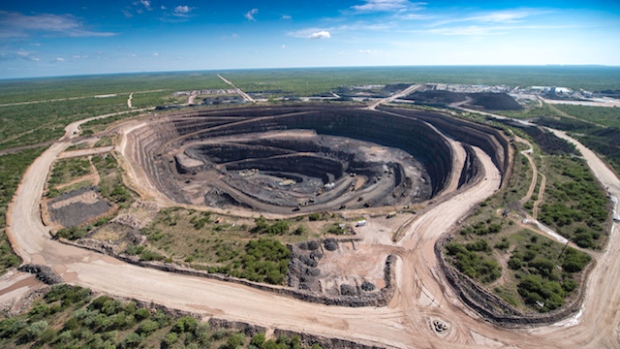 An aerial shot of Lucara's state-of-the-art Karowe Mine located in Botswana.

• Lucara Diamond is expanding the use of its proprietary digital sales platform, driving efficiencies and profits while ensuring pedigree

Diamonds may indeed be forever — but their path from mine to finger has been primarily the same for more than a century.

Now that’s all about to change.

Modern technology has been making serious inroads into this traditional industry. Advances in software, scanning and now blockchain are disrupting long-established business practices.

Natural diamonds come from the earth, mined from ancient volcanoes called kimberlites. Traditionally, once recovered from these mines, rough diamonds were sorted according to their size, shape, colour and other basic features, and grouped into batches or assortments.

Diamond mining companies would then organize sales either through auctions, or “sights,” where wholesalers and manufacturers would be required to buy whole batches.

As it turns out, this antiquated method is not only inflexible; it’s also quite inefficient. That’s because buyers inevitably end up with some diamonds (within set batches) that they don’t need.

Many of those get re-traded into secondary markets. In the end, those diamonds can change hands as many as ten times before diamond cutters polish them for final sale.

That translates into value loss across the entire value chain.

However, all of that is in the midst of transformational change, thanks to a modern technological business solution developed by diamond miner, Lucara Diamond Corp. (TSX: LUC), who for the first time, is selling its diamonds individually, rather than in batches.

“Feedback on the Clara Diamond Solutions platform is overwhelmingly positive. Customers return after their first experience, having saved considerable time and money.”

One of the world’s top producers of large, high-quality Type IIA diamonds is Lucara Diamond. The company’s flagship Karowe mine has been in operation since 2012. This exceptional mine produced the historic Lesedi La Rona, the second-largest gem diamond ever, weighing in at 1,109 carats.

What also distinguishes Lucara from other diamond miners is its transformational sales platform called Clara.

Clara Diamond Solutions is a secure, web-based, digital sales platform. It uses proprietary analytics, combined with cloud and blockchain technologies to completely modernize the diamond supply chain. Eira Thomas, President, CEO and Director of the company notes, “Feedback on the Clara Diamond Solutions platform has been overwhelmingly positive. Customers return after their first experience, having saved considerable time and money.”

And how exactly does Clara work? It all starts with Sarine galaxy scanning of each rough diamond at its source, creating a three-dimensional image and tagging it with an immutable record of its’ origin. Scanned diamonds are subsequently uploaded to Clara’s secure, web-based, digital sales platform made available for sale. Diamond manufacturers, in turn, place their orders, specifying the polished parameters they are looking for in terms of size, cut, clarity and colour.

From there, Clara’s proprietary analytics match each diamond with its optimal polished order.  For the first time, buyers can purchase exactly what they want, without having to buy entire, pre-determined batches. Further, by utilizing integrated blockchain technology, provenance is assured, making “conflict diamonds” a thing of the past.

Thomas explains, “For the producers, Clara helps reach a broader customer base and allows for continuous sales, which helps smooth out cash flows. And by sidestepping purchasing in batches, manufacturers don’t have to finance unwanted inventory and resell unwanted diamonds. All of this means more certainty, transparency and profits for producers and manufacturers.”

This supremely efficient model of bringing diamonds to market is still in its infancy but has already demonstrated early success for Lucara. Since last fall, the number of manufacturers using Clara has grown from four customers to twenty, and each sales cycle has seen increased order sizes from existing clients. Management is even in talks to include a third-party supplier later this year to meet the growing demand.

Already recognized as an industry leader in the incorporation of innovation and new technology, Clara is very much in keeping with Lucara’s reputation and represents an exciting avenue for growth for the company.

Not only will Clara help maximize the value Lucara receives for Karowe diamonds, as demand is increased, but Clara is also completely scalable and will be opened up to other producers to try as well. Moreover, as exciting as Clara Diamond Solutions may be, Lucara possesses all the right ingredients for continued success as a diamond miner.

For instance, Karowe is the only mine in recorded history to have recovered two diamonds larger than 1,000 carats. The Sewelô was an unbroken 1,758 carat near gem-quality diamond recovered this past April. It was the largest diamond from the Karowe mine so far, and one of the largest diamonds in the world, while being the largest ever from Botswana.

Since 2012, Lucara has recovered 14 diamonds above 300 carats, with two surpassing the 1,000-carat threshold. To date, the company has sold 10 diamonds above USD$10 million each, and by all accounts, there are likely many more large diamonds still to be recovered.

As a high margin diamond producer, Lucara’s Karowe mine has the goods to foster growing output.

Karowe is located in Botswana, one of Africa’s most stable countries. It boasts the continent’s longest uninterrupted multi-party democracy, with low levels of corruption and a strong record of human rights. Botswana is also the world’s largest producer of diamonds, which helps explain Karowe’s market-leading endowment.

Karowe has open pit reserves allowing for a mine life that will reach 2026. However, robust output since mining began in 2012 has management excited about organic growth.

Strong potential exists for Lucara to extend Karowe’s mine life for at least another ten years to 2036 by expanding the mine underground.  The company’s $14.9 million program for 2019 consists of ongoing drilling, sampling and geotechnical studies. Included in this effort is an updated resource statement, which indicates higher grades and potentially coarser diamond size-frequency distribution at depth.

Moreover, test pumping, modelling and outfitting of new de-watering wells have helped significantly de-risk the underground mining potential. Thomas adds, “The Feasibility Study results for an underground mine are expected in Q4 this year, and a construction decision should be made by H1 next year,” so investors can anticipate continued updates regarding mine potential.

As a high-margin diamond producer in a stable jurisdiction, Lucara’s strong balance sheet is helping pave the way for two-pronged growth. The Karowe mine could well see its life extended by at least a decade to 2036, and Clara Diamond Solutions could boost revenue and provide asset diversification.

All of these features make Lucara a lower-risk way to invest in the tremendous upside of the diamond market.