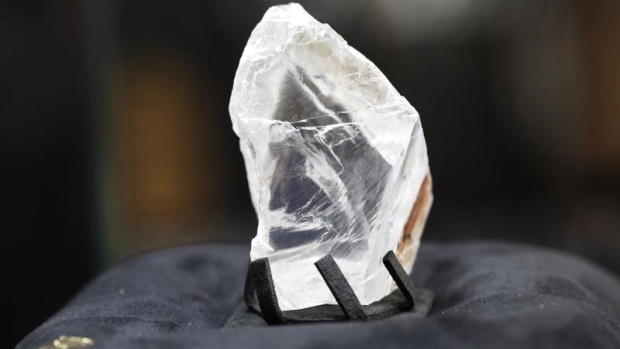 TORONTO -- Nearly two years after unearthing a tennis ball-sized 1,109-carat rough diamond, Lucara Diamond Corp (LUC.TO) is considering forming a partnership to sell the stone if it still does not have a deal in the next six to eight weeks.

Lucara, which failed to sell the world's largest uncut stone at Sotheby's auction house in June 2016, continues to receive offers, Chief Executive William Lamb said on a conference call with analysts on Friday.

The Vancouver-based miner is mulling "one or two" options for an outright sale, but such bids have failed to meet financial scrutiny in the past, Lamb noted.

"If that doesn't pan out ... within the next six to eight weeks we will most fully look to enter into a partnership," Lamb said. "I think we've got to. It's been almost two years since we recovered the stone and the market is, I think, chomping at the bit, waiting to see what the outcome from that is going to be."

Lucara's board regularly discusses how best to capitalize on the diamond, Lamb said.

In July, Reuters reported that Lucara would need a partner in order to cut and sell the rough diamond, second in size only to the 3,106.75 carat Cullinan, which was cut into 105 diamonds, including several British Crown Jewels.

Bidding at the auction in London stalled at US$61 million, short of the US$70 million reserve.

"Everybody on the call will most fully would know one or two wealthy people who, on the weekend, could go out and buy a Lamborghini at [US]$250,000," Lamb said on the call. "What we are asking for, for the stone, is for a company to go out and spend the equivalent of 280 Lamborghinis."

The diamond was discovered at Lucara's Karowe mine in Botswana in November 2015 and is said to be 2.5 to three billion years old. It was named "Lesedi La Rona" or "Our Light" in Tswana, the language of the southern African country.