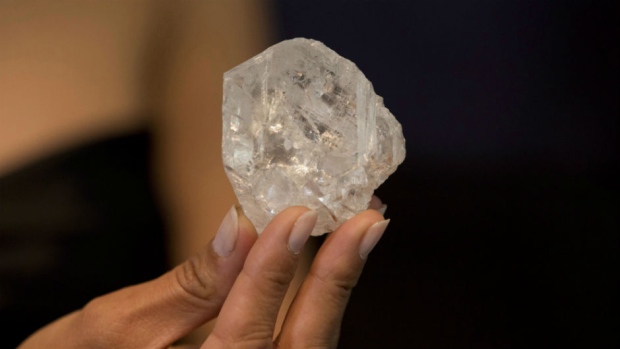 TORONTO -- In the mysterious world of diamond mining, it turns out that some stones are too big to sell.

It's not the ending that William Lamb wanted for his 1,109-carat stone, named "Lesedi La Rona," or "Our Light" in the national language of Botswana where it was mined.

"It's only the second stone recovered in the history of humanity over 1,000 carats. Why would you want to polish it?" said Lucara's chief executive.

"The stone in the rough form contains untold potential ... As soon as you polish it into one solution, everything else is gone."

Lamb had gambled that ultra-rich collectors, who buy and sell precious art works for record-breaking sums at auction, would do the same with a diamond in the raw.

Bidding for the 2.5 to 3 billion year old stone stalled at US$61 million — short of the US$70 million reserve.

"When is a diamond too big? I think we have found that when you go above 1,000 carats, it is too big — certainly from the aspect of analyzing the stones with the technology available," said Panmure Gordon mining analyst Kieron Hodgson.

"At the end of the day, it's about understanding what the stone can produce. And the industry now doesn't work on hunches as much as it used to 20 to 30 years ago."

An arcane business, the diamond industry has no spot market trading, no guarantee that "roughs" will yield any value, and a punishing grading system that can dramatically swing values.

Stones in the hundreds of carats come with additional risk, from the multi-million-dollar price tags and cutting process that can take months or years, to capricious customer demand.

There is a "very, very small universe" of companies with the skill, money and network to polish and sell the Lesedi, which will likely take two to four days for the first laser cut, said Lamb.

But after Lucara's public auction, potential buyers now know what the market is willing to pay, said Edahn Golan, of Edahn Golan Diamond Research & Data. "Maybe it's worth waiting a couple of years," he said.

While Lucara does not need the money, investors may not have that patience.

Lamb said the unsold stone "weighs heavily" on the stock, which is down more than 30 per cent from late last year.

To be sure, Lucara has seen other benefits from the stone, said independent diamond analyst Paul Zimnisky.

"There's the value of a particular diamond, but then there's also a story behind the second-largest rough diamond ever recovered in modern time," he said.

"Just from a publicity standpoint, nobody knew what Lucara Diamond was when they recovered that stone ... now they're probably one of the most recognized names."

Lamb, a former De Beers executive, says it's unlikely Lucara can sell the stone for its desired price and polishing the Lesedi itself is risky.

Another option is for the miner to partner with one or more companies to cut and sell the stone. "We've already done our homework," Lamb said. "You don't take a stone like this and give it to the second best."

It would be a mistake for Lucara to hold onto the Lesedi, said Oded Mansori, RDH managing director. "Maybe next week, there will be a larger stone."

A Dubai trading company paid a record US$63 million for Lucara's 813-carat "Constellation," while Graff bought the 374-carat stone for US$17.5 million.

"Miners have more advanced technology, this is why we see these large stones coming up all of a sudden," said Mansori. "I think that Mother Nature has some more surprises waiting for us."
Lamb won't take that bet.

"Don't hold your breath. There's no guarantee that there's going to be a next one," he said.