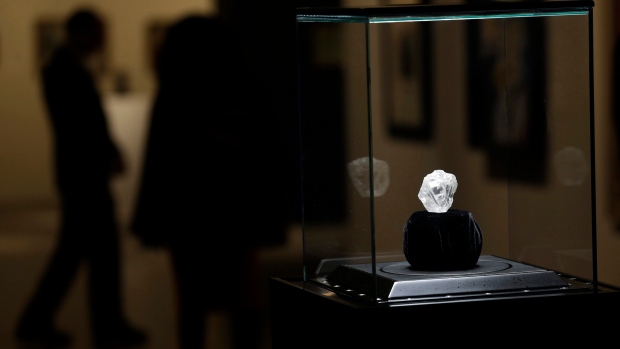 VANCOUVER — A Vancouver-based mining company has sold a tennis ball-sized diamond to a luxury jeweller for US$53 million, or about C$65.6 million.

The 1,109-carat Lesedi La Rona rough stone is reputed to be one of the largest gem-quality diamonds ever discovered.

Lucara Diamond Corp. (LUC.TO) says the price was above the highest bid attracted at an auction in June 2016. But it was below a Southeby's estimate of US$70 million before last year auction.

It was also less than fetched by a smaller diamond, the 813-carat Constellation, that Lucara sold in May 2016 for US$63.1 million — about C$78.3 million at current exchange rates.

Diamond merchant Laurence Graff says the natural beauty of the Lesedi La Rona will be respected when the rough stone is cut.

"The stone will tell us its story, it will dictate how it wants to be cut, and we will take the utmost care to respect its exceptional properties," Graff said in a joint statement issued with Lucara.