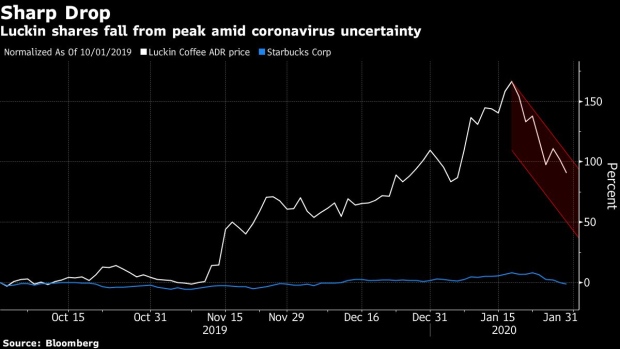 (Bloomberg) -- Luckin Coffee Inc., the Chinese challenger to Starbucks Corp., has lost nearly a third of its value since the outbreak of the coronavirus. However, at least one analyst maintains this may be just a blip for the company.

The upstart has closed all of its coffee shops in Wuhan, the capital of the Hubei province and the epicenter of the deadly virus outbreak, a spokesperson said, without providing the number of stores there. Analysts have noted that Luckin has said the financial impact has not been significant so far, given the timing of the outbreak occurring during the Chinese New Year period.

“We believe the company will recover quickly after the outbreak of the virus subsides,” KeyBanc analyst Eric Gonzalez said in an interview Thursday. He estimates that Luckin has about 200 stores in the Hubei province.

Luckin operated about 4,500 stores at year end amid its whirlwind expansion in China, where the company hopes to upset Starbucks’ dominance there. The stock has more than doubled since its U.S. listing in May 2019.

The coffee chain didn’t provide a timeline for re-openings and said it’s closely monitoring “the evolving situation” nationwide. KeyBanc noted that about 70% to 80% of the company’s footprint is typically closed during the lunar new year holiday period, which has been extended to Feb. 2 from Jan. 30.

Morgan Stanley analyst Lillian Lou said Luckin’s management has maintained its goal of reaching 10,000 stores by the end of 2021 and plans to issue updates in the next two to three weeks.

She said the slowdown in expansion in the first quarter of 2020 could be made up by faster expansion in the following quarters, if the virus situation can be controlled in the next month or two. Meanwhile, management also plans to accelerate the rollout of unmanned retail vending machines to mitigate the potential impact on its stores, she said in a Jan. 27 note.

KeyBanc’s Gonzalez predicts some delay in development and doesn’t see it as a concern for the long-term health of the business.

“We think it’s a transitory issue that will prove to be a buying opportunity for the shares over time,” he said.

Currently six analysts recommend buying shares, compared to one hold and zero sell ratings, according to data complied by Bloomberg.

--With assistance from Crystal Kim.

To contact the reporter on this story: Yueqi Yang in New York at yyang492@bloomberg.net

To contact the editors responsible for this story: Polina Noskova at pnoskova@bloomberg.net, Will Daley, Jennifer Bissell-Linsk