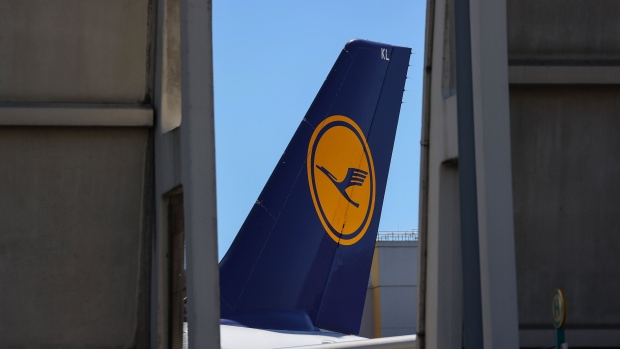 A grounded Airbus SE passenger aircraft, operated by Deutsche Lufthansa AG, sits outside a Lufthansa Technik AG hangar in Frankfurt, Germany, on Thursday, July 30, 2020. Airlines the world over have drastically cut back on flights due to border restrictions and a lack of appetite for travel, particularly internationally. Photographer: Alex Kraus/Bloomberg , Bloomberg

(Bloomberg) -- Deutsche Lufthansa AG told staff that winter schedule cutbacks announced last week will cause it to bench an additional 125 aircraft and temporarily close large parts of its administrative operations.

The reduction will cut the carrier’s active fleet back to the level it operated in the 1970s, with the impact filtering through its operations, it said in a letter to employees seen by Bloomberg. Lufthansa had previously intended to use the planes in an already reduced schedule for the coming months, it said in the letter.

“Winter will be an even bigger challenge,” according to the letter, signed by Chief Executive Officer Carsten Spohr and his fellow board members. “We managed to reduce cash burn from 1 million euros every hour when the pandemic started to ‘only’ 1 million euros every two hours now. Still, that hasn’t changed the drama of the situation.”

The move sheds light on the operational impact of last week’s announcement that Lufthansa will fly only 25% of its planned winter schedule. The company will operate with only the minimum necessary resources, and Lufthansa’s airlines will use smaller and younger aircraft where possible, the managers told staff.

Its low-cost arm Eurowings will fly less than 30 jets during winter and give up its office space in Dusseldorf. Most of the group’s headquarters at Frankfurt airport will also close, according to the memo.

Lufthansa last week reported a narrower loss in the third quarter citing cost reductions and a modest rebound in flights. The adjusted loss of 1.26 billion euros ($1.49 billion) before interest and taxes, based on preliminary figures, was smaller than the second-quarter loss and a better result than analysts had expected.

With more than 10 billion euros of liquidity at hand, the carrier expressed confidence then that it can outlast the global outbreak that’s brought havoc to the aviation industry.

Still, management has voiced frustration about little progress with two of its main unions when it comes to reducing labor expenses, a prerequisite to return to profitability and eventually pay back some 9 billion euros of government loans the company was granted to avoid insolvency.

Handelsblatt reported about the letter earlier.