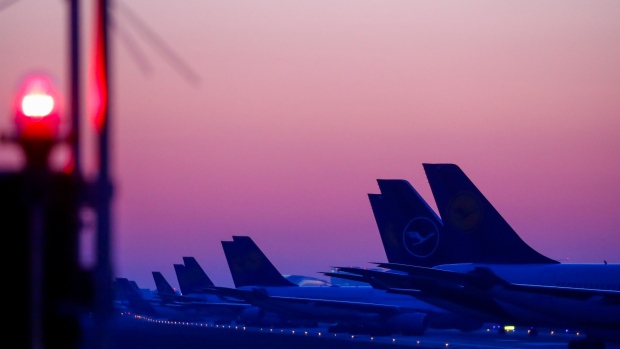 Parked Lufthansa airplanes on a runway north west of Frankfurt Airport in late March. Scandinavia’s main airline SAS AB is cutting as many as 5,000 jobs or about 40% of its workforce, the first major European airline to permanently slash staff numbers as travel demand collapses. Photographer: Alex Kraus /Bloomberg , Richard Bravo

Deutsche Lufthansa AG’s supervisory board held off on accepting a bailout from Germany, raising the stakes in a tug-of-war with the European Union over antitrust demands attached to the 9 billion-euro (US$9.9 billion) package.

In a surprise move, the German airline said it would study the aid proposal and won’t immediately call a shareholder vote on its approval. The EU conditions that it give up German takeoff and landing slots would weaken its hubs in Frankfurt and Munich, Lufthansa said.

The resulting economic hit, along with the need to repay the stabilization funds, need to be “‘analyzed intensively” along with as possible alternative scenarios, Lufthansa said in a statement Wednesday. Nevertheless, the board -- an oversight body heavily represented by workers -- still regards the bailout “as the only viable alternative for maintaining solvency.”

The unexpected delay takes place against the backdrop of a company weakened severely by the coronavirus crisis. Lufthansa has just weeks of liquidity remaining before it runs out of cash, according to people familiar with the matter. The proposed bailout requires shareholder and EU approval before the funds can be distributed, a process that could take several weeks even without the new delay.

“Its cash burn is accelerating,” analysts at Berenberg said of Lufthansa in a note published Monday, adding outflows might have doubled due to summer ticket refunds and fuel hedging losses. “We’ve been surprised at the drawn-out aid process given this elevated urgency.”

Weeks of three-way haggling between the airline, the German government and officials in Brussels over the shape of the support package were intended to avoid further hang-ups after the proposal was put to the company on Monday.

Almost as soon as the deal was announced, the unity started to fray. EU antitrust officials demanded the airline give up the slots at its two key hubs, while German Chancellor Angela Merkel said in an internal meeting that she would fight for Lufthansa’s interest in talks with Brussels.

Germany separately sought EU assurances ahead of a shareholder meeting to vote on the bailout plan. Berlin is working with the EU to ensure the deal investors would vote on won’t violate state aid rules, people said. Germany wants a so-called comfort letter from regulators to offer legal clarity on financial aspects before the EU can approve the deal, one person said. That would not cover the dispute over slots.

Merkel said Wednesday that talks regarding Lufthansa are ongoing. Officials at the airline and in Germany’s Economy Ministry declined to comment.

Officials concede in private that Lufthansa will need to give up a sizable amount of capacity in Germany to secure the commission’s blessing. Lufthansa could also be asked to cut back 20 airplanes in Germany, a person familiar with the matter said.

Airport slots are a crucial currency for airlines, providing them with the ability to operate flights at popular times and to coveted destinations. It’s a commodity that EU regulators have often asked carriers to cede to smaller rivals when seeking approval for mergers, including during Lufthansa’s 2017 takeover of a unit of Air Berlin.