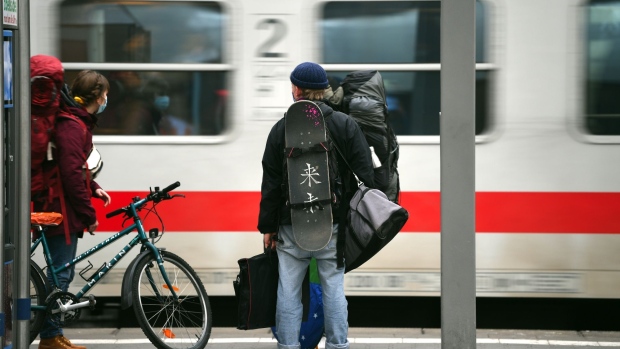 Travelers wait for a Deutsche Bahn AG passenger train to pull into a platform at Munich Central Station in Munich, Germany, on Tuesday, Jan. 5, 2021. Germany is poised to extend stricter lockdown measures beyond Jan. 10 amid criticism over alleged failures in the government’s fledgling vaccination program. , Bloomberg

Trains will link Berlin, Hamburg, Bremen, Muenster and Munich with Lufthansa’s Frankfurt hub non-stop for the first time, according to a statement Monday. Services will start in July, with more cities following in December.

An increasing focus on the environmental impact of flying has pushed some countries to take steps to discourage shorter trips, while there’s also evidence of people opting to make longer land journeys to avoid taking the plane. Lufthansa typically loses money on German domestic flights, providing an additional incentive to shift to rail, though a spokesman said it will evaluate customer acceptance of the move before terminating any air links.

Pressure on airlines to take steps to cut their CO2 profiles has ramped up following a series of state bailouts that’s seen governments increase their influence over flag-carrier airlines.

A rescue of Air France came with political strings including a revamp of French domestic services aimed at encouraging people to take the train. Funding for Lufthansa’s Austrian Airlines included hiked fees for flights under 350 kilometers (217 miles) and moves to serve locations less than three hours from Vienna by rail only.

Lufthansa customers using Deutsche Bahn expresses will be able to book tickets through the airline, and prices will include access to fast security lanes at the terminal.

The German company has been criticized for its comparatively high per-passenger emissions. Network carriers tend to fly with a lower seat density than low-cost rivals on short-haul trips, while their long-haul operations can involve thirsty four-engine jetliners.