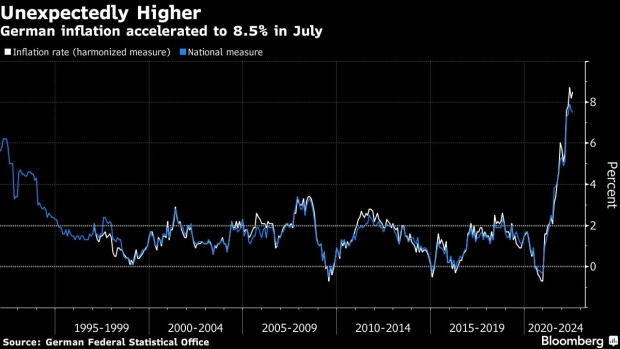 Deutsche Lufthansa AG may face further disruption after its pilots voted for strikes if they’re considered necessary to force a wage deal, a move that could unleash another wave of cancellations unless the airline’s negotiators and labor representatives can settle their differences.

The VC pilots union voted overwhelmingly on Sunday in favor of walkouts, meaning Lufthansa could be hit with stoppages as soon as next month. Strikes would trigger additional cancellations on top of the 7,000 flights the company has scratched this summer due to staffing shortages.

“This positive ballot does not yet necessarily lead to strike action,” the union said in an emailed statement. “But it is an unmistakable signal to Lufthansa to take the needs of cockpit staff seriously.”

Pilot strikes at Europe’s biggest airline would add to a summer of chaos across the continent, where airports and airlines have struggled to accommodate a surge in bookings compared with the pandemic-induced slowdown.

Having initially avoided walkouts that have plagued rivals like Ryanair Holdings Plc, Lufthansa’s management is facing action from its various labor unions. The carrier last week canceled around 1,000 flights at its Frankfurt and Munich hubs due to industrial action by ground staff.

“We need a modern and fair, internationally competitive remuneration structure,” Marcel Groels, the VC’s chief negotiator, said Sunday by email. “In the interest of our passengers, too, Lufthansa must show a serious willingness to find solutions.”

Surging German inflation is leading workers across the economy to demand higher pay, bringing the threat of strikes in several sectors. Lufthansa’s pilots are demanding wage increases to help offset the near double-digit rise in consumer prices.

After surviving a pandemic that pushed the carrier to the brink of insolvency, Lufthansa faces a swell of anger from employees who say they’ve borne the brunt of drastic cost cuts that they say put Lufthansa’s branding as a premium carrier at risk.

Chief Executive Officer Carsten Spohr has pledged to boost the airline’s earnings margin to a minimum of 8% by 2024, a move he said was needed to reduce debt. Disputes with worker representatives suggest Spohr might have trouble reaching those goals, as he tries to balance the need for more staff with a push to cut costs.

Still, the airline this month said it returned to profitability in the second quarter, benefiting from surging travel demand that’s forced the sector to raise fares and limit seat availability.