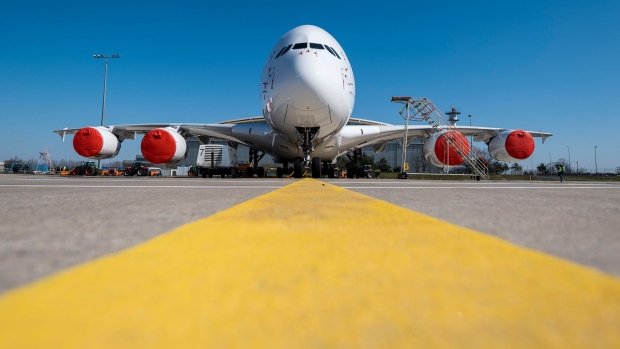 FRANKFURT AM MAIN, GERMANY - MARCH 25: An Airbus A380-800 passenger plane of German airline Lufthansa stands parked and pulled from service at Frankfurt Airport on March 25, 2020 in Frankfurt, Germany. Lufthansa is setting aside 700 of its 763 planes due to a collapse in reservations and passenger numbers due to the worldwide effects of the coronavirus (COVID-19). Airports across the globe have closed, governments have imposed severe restrictions at borders and tourism has come to a halt. (Photo by Thomas Lohnes/Getty Images) , Photographer: Thomas Lohnes/Getty Images Europe

Deutsche Lufthansa AG plans to eliminate its biggest passenger jets as it deepens fleet cuts, leading to a parallel surge in job reductions, people with knowledge of the proposals said.

Lufthansa is looking at retiring remaining Airbus SE A380 double-deckers, the bulk of smaller A340s, and all of its Boeing Co. 747-400 jumbos, according to the people, who asked not to be named discussing a confidential matter. There would also be a cull of narrow-body planes that feed longer routes, they said.

The fleet cuts would surpass the 100-aircraft reduction so far disclosed by Lufthansa, net of new deliveries, with job losses exceeding the 22,000 that the carrier had said such a contraction would entail, said the people. No final decision has been made on the measures, they said.

Europe’s biggest airline is falling back on its most economically sustainable routes as the coronavirus crisis roils global travel markets. Retiring thirsty four-engine aircraft like those being targeted will remove high-capacity models that are hardest to fill while also boosting margins by slashing fuel burn.

The pandemic has thrown Lufthansa into a spin, forcing it to accept 9 billion euros (US$11 billion) in state aid to survive. Hopes for a quick rebound have been dashed by a surge in COVID-19 cases across Europe, with carriers including EasyJet Plc and British Airways owner IAG SA paring expansion plans.

Lufthansa may keep a handful of younger A340-600s, preserving capacity for busier routes, the people said. That would also reduce the size of immediate writedowns, which will factor into its decision making, one person said.

The group has so far said that while it aims to mothball about 300 planes next year and 200 in 2022, the 760-strong fleet will need to be about 100 aircraft smaller from 2023. Handelsblatt reported this week that the number cut could increase, without saying which models might be affected.

The new moves would leave Lufthansa with a four-engine fleet limited mainly to Boeing 747-8I jumbos, of which it has 19, the youngest of which are just five years old.

As of Dec. 31, Lufthansa operated the following four-engine jets: