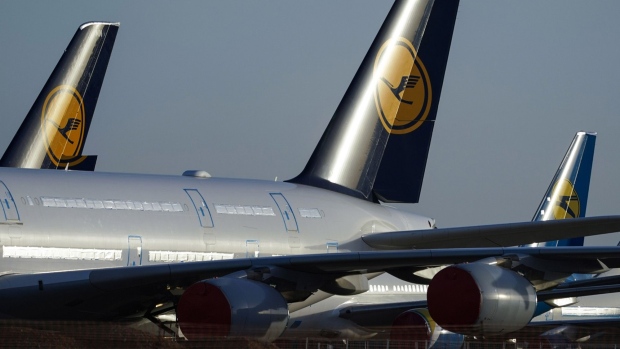 (Bloomberg) -- Deutsche Lufthansa AG is working with banks on a plan to raise around 3 billion euros ($3.7 billion) in equity to help repay last year’s state bailout, according to people familiar with the matter.

The timing and size of the capital increase will be subject to market conditions and the company could raise the money as soon as June, the people said. A spokesman for Lufthansa declined to comment.

The move would give Europe’s largest airline enough cash to repay most of a 5.5 billion-euro silent participation held by the German government -- the biggest remaining piece of its 9 billion-euro government bailout. The interest rates on the instrument, a debt-equity hybrid that doesn’t dilute shareholder voting rights, are set to rise over coming years.

Lufthansa shareholders approved a potential capital raise of 5.5 billion euros last week, though the company had previously said it wouldn’t use the full amount available, and instead aim for the “smallest possible” increase.

Reuters reported earlier on the size of the planned deal.