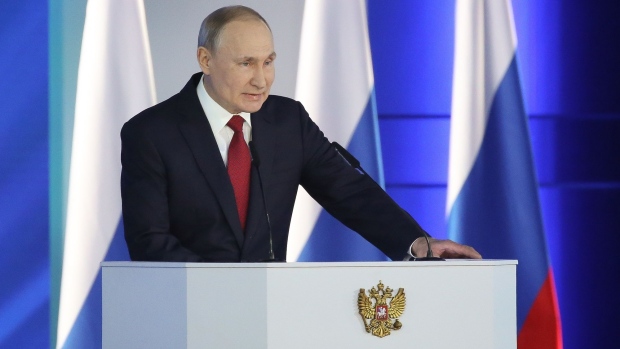 Alexander Lukashenko, Belarus’s president, gestures while giving a speech during a rally of his supporters in Independence Square in Minsk, Belarus, on Sunday, Aug. 16, 2020. Hundreds of thousands of people joined peaceful rallies in the capital, Minsk, and in cities across the country Sunday calling for President Alexander Lukashenko’s resignation and the release of detainees. , Bloomberg

The meetings in Moscow included discussions of advanced S-400 missile defense systems, according to a statement posted Sunday on Lukashenko’s website.

“Big volumes show how seriously we and Russian Federation take this Western direction, where we are very close to NATO troops,” Lukashenko told reporters after he attended Zapad-2021 joint war games.

Lukashenko said S-300 systems were currently deployed to protect Belarus from the West, but he needed a more advanced system to secure his country’s southern border with Ukraine. Planned purchases could exceed $1 billion, according to the Belorussian state news agency Belta.

Lukashenko said that by 2025 he wants dozens of new warplanes and helicopters from Russia. One problem: Belarus lacks the funds to pay for such deliveries.

The Belorussian leader said that he explained to Putin where he wants to deploy S-400 systems, and that Putin ordered his defense ministry to initiate discussions with Minsk.

The leaders touted the week-long joint war games that kicked off Thursday.

The Zapad-2021 maneuvers are taking place in both Russia and Belarus, and involve as many as 200,000 troops, as well as 80 warplanes and helicopters, 760 of armored vehicles and 15 ships, according to Russia’s defense ministry.

Putin will oversee the effort on Monday by visiting the Mulino shooting range in Nizhny Novgorod, about 400 kilometers (249 miles) east of Moscow, according to the Kremlin. Other participants will include India, Mongolia, Armenia, Kazakhstan and Kyrgyzstan.

Russia is stepping up its military presence in Belarus by deploying Su-30SM fighter jets for joint patrols. Anti-aircraft missile forces also began joint missions along Belarus’s western edge, which borders the North Atlantic Treaty Organization, according to the Defense Ministry in Minsk.

While Belarus has so far resisted requests to host a Russian base on its territory, the drills come amid heightened tensions in the region.

Poland declared a state of emergency after accusing Belarus of using asylum seekers as a weapon following increased traffic across the border of migrants from Iraq and Afghanistan. Fellow NATO allies Latvia and Lithuania are locked in a similar stand-off with Belarus over migrant flows into the EU states.