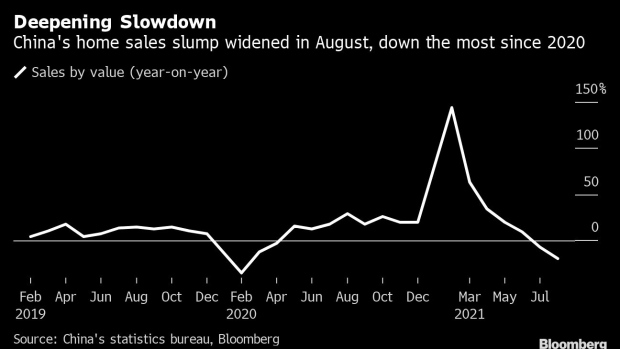 Nine out of 10 land parcels in Hangzhou, home to tech giant Alibaba Group Holding Ltd., went unsold during the second batch of centralized land bidding recently, the Securities Daily reported. By comparison, in January all four parcels in the eastern city were auctioned at the upper end of prices set by local authorities.

The land market is also losing steam in other cities, with parcels sold at their asking prices in Qingdao, Jinan, Tianjin and Shenyang, the Economic Information Daily reported. The gap between asking and final prices narrowed to 1% in Suzhou.

The cooling comes amid mounting concern that China Evergrande Group’s deepening debt crunch will hurt the real estate industry, which is already seeing declining home sales and slowing price growth. As well as curtailing excess borrowing by developers, Chinese authorities have imposed measures including higher mortgage rates and tighter rules for home purchases. Local governments have prohibited the use of borrowed capital for public land purchases, according to Bloomberg Intelligence.

“China’s land market could stay lackluster in the short term on Evergrande’s liquidity crisis,” BI analysts including Patrick Wong wrote in a note Friday. “More developers may switch to a more conservative land acquisition strategy given their priority to sustain cash flow and liquidity.”

China’s tightening of the $60 trillion housing market has been almost unprecedented, with more than 400 new property regulations introduced this year by local and central governments, according to Goldman Sachs Group Inc.

Authorities have been widening curbs on land auctions in some major cities, potentially hurting a key source of cash for local governments.

Home sales by value slumped 20% in August from a year earlier, the biggest drop since the onset of the coronavirus at the start of last year, according to statistics bureau figures.