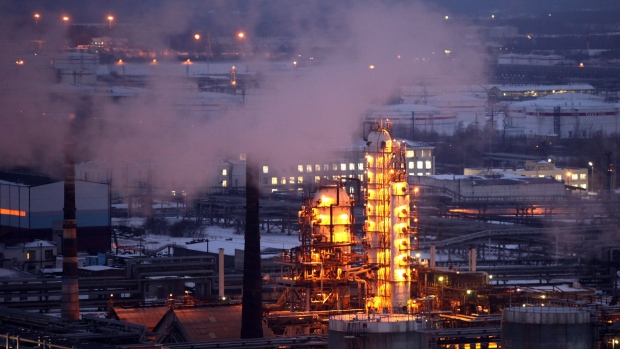 (Bloomberg) -- Russia’s second-largest oil producer is looking to save more than $1 billion with its offer to buy back $6.3 billion of outstanding bonds.

Lukoil PJSC pitched its buyback announced this week as a way for foreign bondholders to cash out of the securities and avoid having interest payments tied up by international sanctions against Russia over its invasion of Ukraine.

The company is offering to buy back the notes in four of the five outstanding issues at less than 80% of face value, according to a document seen by Bloomberg News and people familiar with the matter. Unlike in a typical bond tender offer, the document doesn’t mention a deadline to tender the notes.

The terms of the exchange offer weren’t disclosed in the buyback announcement. Lukoil asked bondholders to contact the company or securities firm i2 Capital Markets Ltd. as the company wanted to negotiate the price individually, according to a filing.

If the company bought all its outstanding notes at those prices, it would save up to about $1.32 billion in principal, according to Bloomberg calculations.

While a significant discount, the exchange offered by Lukoil is well above the levels at which the notes have been quoted since Russia invaded Ukraine at the end of February. As an example, the notes due in 2023 tanked in March and have been quoted at around 70 cents on the dollar since May.

A Lukoil spokesperson didn’t respond to a request for comment.

The oil giant’s earnings this year are set to get a boost from the global rally in energy prices. However, international sanctions and restrictions imposed by Russia limit the company’s options to invest in developing its core oil and gas business or distribute money to shareholders, freeing up cash for bond buybacks.

“Lukoil finished 2021 with a cash pile of $9 billion and was supposed to receive a significant operating cash flow in the first half of 2022” despite the sanctions on Russia, analysts at BCS Global Markets said in a research note this week.