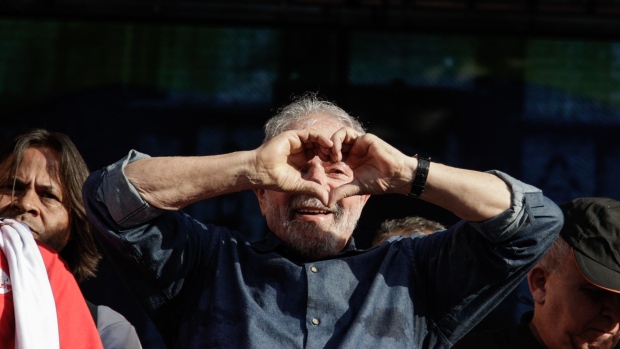 Luiz Inacio Lula da Silva, Brazil's former president, gestures after speaking during an event organized by workers' unions on International Workers' Day in Sao Paulo, Brazil, on Sunday, May 1, 2022. According to latest polling, Lula has 41% of voting intentions in the first round of presidential elections to be held later this year, against 36% for President Jair Bolsonaro. , Bloomberg

(Bloomberg) -- Brazil’s presidential front-runner, Luiz Inacio Lula da Silva, is getting married in a move that’s likely to help him rejuvenate his image while boosting his appeal with more conservative voters.

Lula, 76, is exchanging vows with sociologist Rosangela Silva, 56, in a private ceremony in Sao Paulo on Wednesday. They started dating in 2017, but their relationship only became public two years later, while the widowed former president was behind bars to serve a corruption sentence that was later tossed out by the country’s top court.

Since then, Janja, as the sociologist is widely known, has been a fixture at events attended by Lula. Initially introduced as his girlfriend and then his fiancee, she will take the role of first lady if the leftist leader wins a third term in the country’s highest office in October. While in Brazil such a role is less subject to public scrutiny than in the US, it still helps the president to consolidate his image as a family man.

“Lula is trying to dialogue with an audience that has a more traditional perception of family,” said Mara Telles, a political science professor at the Federal University of Minas Gerais.

Lula himself has repeatedly mentioned his wedding in remarks that seek to consolidate that image, recently tweeting that he’s “not hooking up with Janja,” but rather marring her and taking responsibility the same way he wants to “take responsibility for Brazil.”

He has also used the wedding as an opportunity to show he has the energy to be president again, while dispelling investor concerns that he could return as a resentful leader following his stint in prison. “Someone who is 76 years old, who is in love, do you think he has time to be angry?” he said two weeks ago at an event in Sao Paulo, hugging his fiancee.

Janja has usually taken the role of a cheerleader in public, but behind closed doors participates in meetings with Lula to discuss political issues, according to two members of his campaign who requested anonymity to discuss private matters.

She declined a request to be interviewed for this story.

“She doesn’t need to be guided to act in the campaign,” Hoffman said. “She already does that naturally and with legitimacy.”