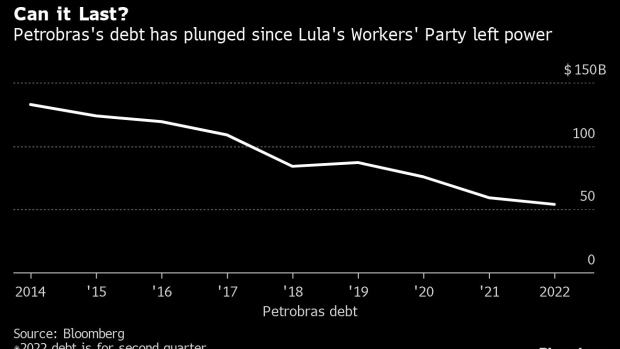 (Bloomberg) -- Next week’s elections in Brazil pose a challenge to Petrobras investors. Former President Luiz Inacio Lula da Silva, the front-runner, has vowed to use the company as a vehicle for national development. Incumbent Jair Bolsonaro, who’s fighting for a come-from-behind upset, is proposing the complete opposite, with plans to privatize the state-run giant.

The contrast is a rare one in this election cycle, in which the leading candidates have offered few details about economic policies they’d pursue. It also makes Petrobras a binary case for investors: the firm is churning out dividends and share prices are already cheap compared to other oil majors, but the cash stream could also dry up and leverage could increase if Lula wins and follows through on his pledges.

“The stock is maybe one of the most complex investment cases in Brazil right now,” said Flavio Kac, a portfolio manager at ASA Investments. “A Bolsonaro win would pave the way for its potential privatization, while a new government could lead to margin pressure and lower profits.”

What to Know About Bolsonaro-Lula Showdown in Brazil: QuickTake

Petroleo Brasileiro SA, Latin America’s largest producer with 2.7 million barrels a day of oil and gas output, became a source of contention during the first presidential debate. Bolsonaro accused Lula of mismanaging the company and presiding over an epic corruption scandal. Lula criticized Bolsonaro for “carving up” Petrobras through asset sales, as well as the decision to privatize utility Eletrobras.

Lula, a former union leader who governed Brazil from 2003 to 2010, has a checkered past with Petrobras and the oil industry at large. He presided over growing output and the discovery of the largest group of deep-water fields this century, which have become a profit center for Petrobras.

At the same time, he halted new lease sales in the so-called pre-salt to overhaul taxes and regulations, throttling how fast oil production grew. Without the licensing delays, Brazil would be pumping twice as much right now, according to analysts. Lula also implemented costly build-in-Brazil requirements that discouraged investments. If he wins, the local oil industry will look to who he recruits for his energy team to gauge how big the policy shift will be.

“Lula has relied heavily on lieutenants, so who is that new gang?” said Schreiner Parker, the head of Latin America for Rystad Energy, a consultancy. “It will be interesting to see who fills in the mandarin positions.”

Political consultancy Eurasia sees Lula’s odds of winning the election up at 70%.

Another Lula administration would see Petrobras expanding its refineries in Brazil and rebuilding its international operations, Senator Jean Paul Prates, his point person for oil and gas, said in an interview. The company would also become a global player in the energy transition -- even if it means lower profits and dividends. Petrobras’s limited focus on the pre-salt has generated heaps of cash in the short term, but leaves it exposed to a changing industry in the coming decades, he said.

“It has turned into a huge dairy cow, and it won’t last,” Prates said. “It’s walking blindfolded off a cliff.”

While Lula oversaw a massive rally in his eight years in office, aided by a commodities super-cycle, his legacy was tarnished by policy mistakes made by his successor and the so-called Carwash corruption probe. The investigation centered on Petrobras, and put him in jail for almost a year and a half. His convictions were later tossed out by the Supreme Court on procedural grounds, but some Brazilians still see him as a symbol of corruption. In the first presidential debate, Bolsonaro branded Lula’s government “the most corrupt in history.”

To be sure, Brazil won’t stop pumping oil no matter the outcome of the October vote. Both candidates are supportive of oil and resource extraction, unlike Colombia’s recently elected President Gustavo Petro, who plans to ban new exploration out of environmental concerns. Besides, Petrobras has found so much oil this century that production will continue to grow whoever wins.

“Petrobras will continue as a giant in Brazil,” said Luiz Felipe Coutinho, the chief executive officer of Origem Energia, which has bought onshore natural gas fields from Petrobras and considers the company its main commercial partner.

Another thing unlikely to change regardless of the outcome is the risk of Petrobras subsidizing fuels. Lula has attacked Bolsonaro over high gasoline prices, a major complaint among Brazilians this year. Bolsonaro responded by attacking Petrobras’s leadership and ultimately slashing taxes to provide consumers relief.

Lula Win May Be Stressful, But Not Disastrous, for Petrobras

“At the end of the day it’s just not really a private sector company. It has a different cadre of investors who understand the quasi-sovereign aspect,” said Wilbur Matthews, founder of Vaquero Global Investment LP, who has owned Petrobras bonds in the past but thinks they are overpriced at the moment. “You don’t buy Petrobras stocks or bonds because you love the corporate dynamics.”