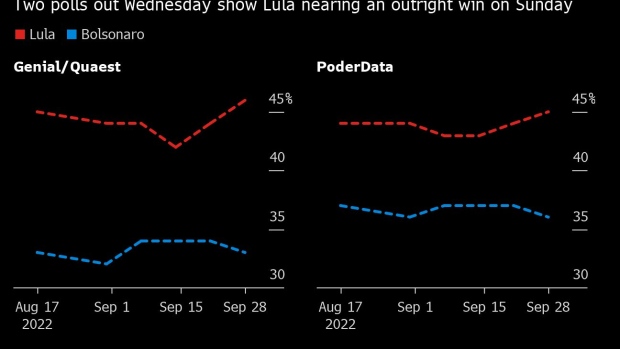 Luiz Inacio Lula da Silva, Brazil's former president, left, waves at supporters ahead of a rally at the Portela Samba School in Rio de Janeiro, Brazil, on Sunday, Sept. 25, 2022. Lula is gaining momentum in the final days of campaigning, nearing the simple majority needed to give him a first-round presidential victory on Oct. 2, a new DataFolha poll shows. , Bloomberg

Pollster Quaest said Wednesday the leftist challenger would get 50.5% of valid votes on Sunday, while PoderData placed him just shy of a definitive win with 48%. Excluding null and blank ballots, a candidate needs to break a threshold of 50% to avoid a runoff.

All eyes are on whether Lula, 76, has the momentum to achieve a single-round victory over incumbent President Jair Bolsonaro on Oct. 2. Such a win has not happened in Brazil since 1998. Short of that, they will likely square off again on Oct. 30.

Lula, who benefited from a period of economic bonanza during his previous two terms in office, has been the heavy favorite since the Supreme Court cleared him of corruption convictions last year, enabling his latest run.

With only about 2% of the electorate still undecided, Lula is making a final push to win over the political center. On Tuesday, he attended a dinner with some of the country’s top bankers and executives, the daily Estadao reported, and is set to dine with others this evening.

Analysts say an outright victory by Lula largely depends on his his ability to peel off voters from long-shot presidential contenders. Support for candidates other than the current and former president makes up about 12% of all voting intentions.

Of those, nearly a quarter would be willing to switch their vote to ensure Lula wins in the first round, according to Felipe Nunes, the head of Quaest.

Bolsonaro, 67, appears to have stagnated in the last days of campaigning, with Quaest and PoderData placing him at 36% and 38% of valid votes in the first round, respectively.

A major test for a last-minute change in preference will come on Thursday when the presidential hopefuls square off in the last televised debate before the vote.

Both pollsters show Lula handily winning in a second round.

(Updates with Lula’s campaign events, debate and analysis throughout.)