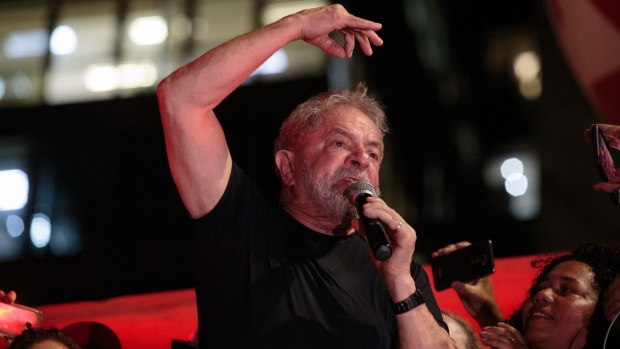 Judge Danilo Pereira Junior said on Friday the leftist leader could leave jail in the southern city of Curitiba where he’s been since 2018 serving a sentence for corruption, according to a court document. Lula’s lawyers had filed a petition calling for his release after the Supreme Court ruled late on Thursday that convicted criminals should be incarcerated only after all their appeals are exhausted.

The move thrusts the charismatic and highly-influential 74 year-old politician back into the spotlight at a highly polarized time in Brazilian politics. Domestic law still prevents Lula from running for public office due to his conviction, but there’s a concern his presence may galvanize the left in their opposition to rival President Jair Bolsonaro and the market-friendly policies his administration is pursuing.

Lula was convicted of corruption in 2017 and lost two appeals since then, but he has not exhausted the entire process. He has repeatedly denied wrongdoing and has said he’s victim of political persecution.

There are several other ongoing cases against the former President, who was in office from 2003 to 2010 and a key figure the election of Dilma Rousseff, his handpicked successor, for another two terms. Lula was expected to run for president again in 2018 before being imprisoned, and was still featured heavily in ads for the campaign of the candidate of his Workers’ Party, Fernando Haddad, who lost to Bolsonaro.

Thursday evening’s 6-5 top court decision reversed the recent practice of jailing criminals whose convictions were upheld on first appeal -- which was instrumental in the success of the Carwash anti-corruption probe.

Dozens of Senators and deputies, as well as members of Bolsonaro’s own family and several advocacy groups had pressured judges to keep the status quo. The leader of Bolsonaro’s party in the Senate, Major Olimpio, said the decision was cause of “shame” and that the top court’s justices “voted in favor of criminals and against the Brazilian people.”

Though Lula’s release could galvanize the left and stir up an already heated political environment, it would have small repercussions on Brazil’s economic reforms, according to consultancy Eurasia. Christopher Garman, the firm’s managing director for the Americas, said in a telephone interview that centrist lawmakers are seeing the reformist agenda as part of their own interests.