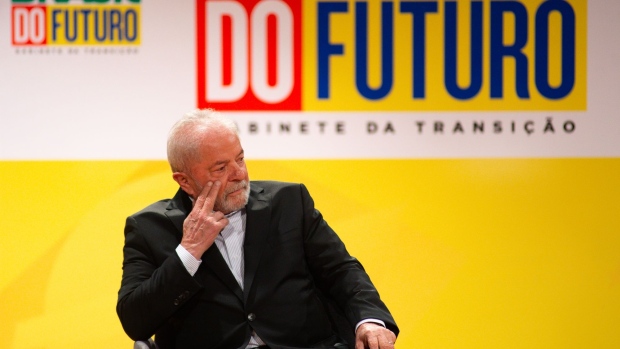 (Bloomberg) -- Luiz Inacio Lula da Silva’s efforts to boost public spending cleared a key first hurdle Wednesday as Brazil’s senate approved a bill that will free up money to pay for his campaign pledges, a proposal that has investors worried about the incoming government’s fiscal credibility.

The bill, dubbed PEC da Transição, was approved with 64 votes in favor, more than the 49 it needed to clear the upper house, in two separate rounds of voting. Lawmakers made no changes to the text agreed to earlier, which boosted the so-called spending cap, a rule that limits the growth of government expenditures, by 145 billion reais ($28 billion) for two years, making room for increased social aid that wasn’t fully budgeted by outgoing President Jair Bolsonaro.

The bill now moves to the lower house, where lawmakers are expected to vote on it next week. It has to be approved before the year-end recess to not disrupt social aid payments when the president-elect takes office on Jan. 1, 2023.

As a constitutional amendment, it requires the backing of three-fifths of lawmakers in two rounds of voting in each house of congress.

Investors, who are hoping congress will limit the incoming government’s spending, cheered Tuesday on the agreement that trimmed the proposal from an initial 175 billion reais in extra funds. Concerns Lula will erode fiscal accounts and fan inflation in Latin America’s largest economy sent Brazilian markets tumbling in November, missing out on a rally in emerging-market assets.

Still, the additional spending could increase to 169 billion reais a year, or about 1.6% of Brazil’s gross domestic product according to Goldman Sachs Group Inc. That’s because in addition to social spending, the plan also exempts public investments from the fiscal rule, as long as there are extraordinary revenues to cover for them.

The incoming government also agreed to propose a new fiscal anchor by Aug. 31 to replace the spending cap. The rule to limit the growth of public spending, which came into effect in 2017, has been breached every year since 2020 and is considered by many economists as unsustainable in the long run.

The central bank disagrees. In recent presentations, the bank’s chief Roberto Campos Neto has warned that lack of a credible fiscal plan would boost inflation expectations, increase market rates and hurt the economy — eventually constraining the government’s financial ability to help those who need more.

In a statement accompanying its decision to hold the benchmark Selic rate on Wednesday, the bank’s board members reiterated they will consider holding rates steady for “a sufficiently long period,” and that they will not hesitate to resume hikes if inflation doesn’t slow as planned.

Brazil Pledges Steady Rates and Warns of Spending Under Lula

“The current scenario, particularly uncertain on the fiscal side, requires serenity when evaluating risks,” they wrote. “The Committee will closely monitor future developments in fiscal policy and, in particular, its effects on asset prices and inflation expectations, with potential impacts on the dynamics of future inflation.”