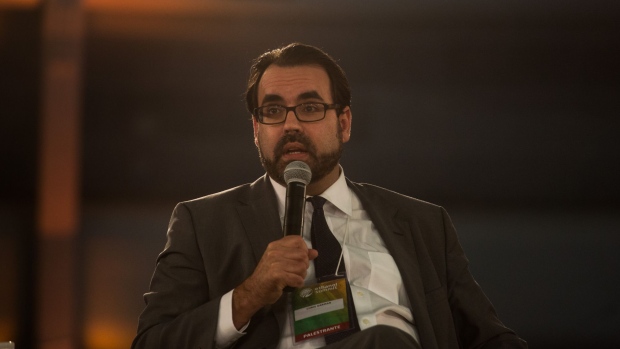 Luiz Inacio Lula da Silva, Brazil's former president, speaks during a rally at the Portela Samba School in Rio de Janeiro, Brazil, on Sunday, Sept. 25, 2022. Lula is gaining momentum in the final days of campaigning, nearing the simple majority needed to give him a first-round presidential victory on Oct. 2, a new DataFolha poll shows. , Bloomberg

Incumbent Jair Bolsonaro is failing at curbing Lula’s “final sprint,” which is putting him closer to clinching an outright victory on Oct. 2, according to Christopher Garman, managing director at the firm.

“Our 70% chance of Lula winning the elections is biased upward, the momentum seen last week with the ‘useful vote’ hasn’t changed,” Garman said in an interview at Bloomberg’s Sao Paulo offices, referring to people changing their votes to a candidate they see as having better odds. “This is a bad sign for Bolsonaro.”

Recent polls show Lula’s support increasing in the final days of the campaign, with some surveys putting the left-wing former president within inches of getting the more than 50% of valid votes -- which exclude ballots cast in blank or annulled -- he needs to avoid a runoff.

It’s an outcome that hasn’t happened in a presidential race since 1998, when then-President Fernando Henrique Cardoso was re-elected. Not even Lula, at the height of his popularity, managed to pull-off an outright win when he was chosen for a second term in the 2000s.

Garman puts odds of that happening between 20% and 25% -- double from earlier in the race, but still far from a base-case. Face-to-face surveys tend to over-represent left-wing candidates, he says, since it underestimates abstention rates that are proportionally higher among the poorest.

Thursday evening’s televised debate will be key for the outcome of Sunday’s vote.

“Lula must do well on the debate if he wants to win” in the first-round, Garman said. “He has to hammer the message that, back when he was president, he raised credibility and the economic conditions of Brazil -- and that, if he wins this time, he will do it again and better.”

A first-round Lula win or a commanding lead into the second round don’t reduce the odds of Bolsonaro questioning the election results, given his long-standing distrust of Brazil’s electronic voting machines, Garman said.

“Are the odds of Bolsonaro calling the vote into question lower if he loses by 10 percentage points, or if he loses in the first round? I don’t think so,” he said.

While the president’s supporters will likely hold demonstrations protesting a rigged election no matter the outcome of the vote, Garman doesn’t expect that to have any impact on the official recognition of the vote.

What to Know About Bolsonaro-Lula Showdown in Brazil: QuickTake

If he does win, Lula will likely try to replicate his 2003 strategy, picking a politician to lead his economic team. “A minister with a political profile and some good market names,” Garman says.

Garman also says that tax reform under Lula could be a positive surprise, unifying federal taxes under a value added tax, known as IVA, and potentially adding levies on the wealthy. The challenge, though will be delivering on growth.