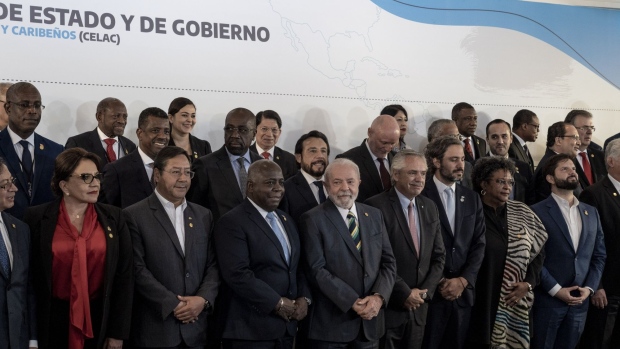 (Bloomberg) -- President Luiz Inacio Lula da Silva’s participation in a summit of Latin American leaders, less than a month after taking office, marked Brazil’s efforts to resume a leading role in the region and counter the influence of the US.

“Brazil is back in the region and ready to work side by side with all of you, with a very strong sense of solidarity and closeness,” Lula said at a summit of the Community of Latin American and Caribbean States in Buenos Aires on Tuesday.

The group of 33 nations known as CELAC was founded in 2010 to undermine the Washington-based Organization of American States, through which the US has a big voice in the region. Brazil left CELAC in 2020 under former President Jair Bolsonaro, who had political and ideological differences with the socialists governments of Cuba and Venezuela and was aligned to the Trump administration.

The return of Latin America’s largest economy to the organization coincides with a turn to the left in the governments of the region and was celebrated by Lula’s peers at the end of the meeting.

The group reaffirmed its commitment to democracy and demanded that regional and development banks improve access to credit for countries that emerged from Covid-19 with higher levels of public debt, according to a final statement.

“We have adopted a very good, comprehensive and thorough declaration on a wide range of challenges facing us,” said Ralph Gonsalves, Prime Minister of the tiny Caribbean island nation of St. Vincent and the Grenadines, which took over the CELAC temporary presidency role from Argentina.

While the summit also serves as a forum for member nations to strengthen diplomatic and trade ties, ideological differences remained a source of tension at a time of heightened political volatility in the region. Uruguay’s President Luis Lacalle Pou criticized CELAC members that do not respect democracy or human rights and warned that the organization risks becoming a “club of ideological friends” in a clear dig against Cuba, Venezuela and Nicaragua.

Uruguay is pushing to reach a bilateral trade deal with China in a strategy that also generated tensions with its Mercosur trade bloc partners — Brazil, Argentina and Paraguay — which prioritize negotiating agreements as a group.

In a subsequent meeting in Montevideo on Wednesday, Lula and Lacalle Pou announced that Brazil and Uruguay will create a working group to study ways to develop trade with China in an apparent concession to the Uruguayan government.

“We are going to intensify the dialog with the European Union so that we can discuss an agreement with China and Mercosur next,” Lula said. “Although China is Brazil’s main trading partner, we want to talk as Mercosur and discuss a Mercosur-China agreement with our Chinese friends.”

While the CELAC summit achieved little in terms of concrete policy, it did make clear that despite a shift to the left in the region, differences between countries remain a huge challenge for regional integration, according to Jimena Blanco, head of Americas political research at Verisk Maplecroft.

“Mercosur has yet to deliver on its primary goal of trade integration for its four founding members,” Blanco said. “Even integrating trade within the bloc, let alone negotiating with external markets, remains a tall task.”

--With assistance from Ken Parks and Martha Beck.

(Recasts top of the story, adds analyst comment at the end.)